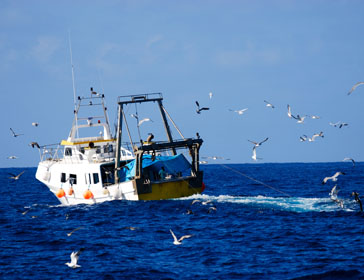 Nine of the 20 areas around the world with the highest amounts of fish discarded at sea (in terms of the amount of fish discarded compared to the amount landed) can be found in the North-East Atlantic. Six of these are fisheries worked by bottom trawling and the other three are worked by vessels that use another trawling technique: the “Danish seine”.

The survival rate of fish that manage to escape from the nets thanks to improved technologies (grilles, bigger mesh openings, etc.), differs between species. In some cases, it can be as low as 10%, which means that trawling mortality rate is higher than the volume of landed catch.

The bait used to catch fish by longliners also attracts other carnivorous marine creatures such as seabirds and sea turtles. In the case of the latter, with the exception of the green sea turtle (Chelonia mydas), which is herbivorous, all the other species can fall victim to these hooks, particularly if they are used for fishing in surface waters where they are easier for the turtles to spot and access.

On biting or swallowing the bait, the hook ends up caught in the mouth of oesophagus of these animals. Extraction can be more or less difficult depending on the depth of the hook, so it is not unusual to see turtles that have repeatedly been caught on longlines during the same season, with various hooks and fishing wire sticking out from their mouths.

Gillnets, including driftnets, involve the deployment of hundreds of metres of nets left in the water for long periods of time, from hours to days. Along with their target species, these nets also trap other species that are often discarded back into the sea, injured or dead.

Gillnets kill more than 30 species around the world, including dolphins, porpoises  and turtles.