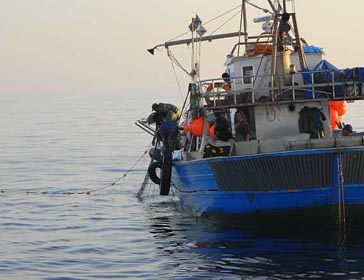 Currently, the use of gill nets, including driftnets, longer than 2.5 kms or to catch large pelagic species is prohibited by European legislation for any EU-flagged vessel or vessels in EU waters.

The Italian government allowed the use of ferrettara with a mesh size up to 150 mm to catch small pelagic species. In January 2002, the use of these nets and their characteristics were regulated, restricting their use to the first three miles from the coast and prohibiting a mesh size of more than 100 mm. However, the Italian government gave a new twist to their policies. Currently, the legal distance from the coast to use ferrettara is 10 miles and a mesh size of 18 cm is permitted. These measures allow large pelagic species to be caught, including swordfish and bluefin tuna, which is prohibited by the EU. To learn more about the use of drift nets in Italy, refer to the case of Italy.

In the case of France, the French government issued a Special Fishing Permit (PPS) to use driftnets in 2003 when the EU prohibition was already in effect. Two decrees were later added to this permit in 2004 and 2005, regulating the use of thonailles and enforcing the incorporation of a floating anchor on one end of the gear and acoustic devices to dissuade certain species on the upper edge of the net. In 2007, the Ministry of Agriculture and Fisheries protected the fleet of thonaillers when it included these vessels in a new special fishing permit for bluefin tuna. Despite the fact that the EU prohibited this gear, the prohibition was not considered effective until 28 June 2007, when the EU Council of Ministers approved a new regulation that included a complete definition of drift nets.  According to this new regulation, nets that included a floating anchor on one end were also considered drift nets. To read more about the use of drift nets in France, refer to the case of France.

*ICCAT: International Commission for the Conservation of Atlantic Tunas

*ACCOBAMS: Agreement on the Conservation of Cetaceans of the Black Sea, Mediterranean Sea and Contiguous Atlantic Area