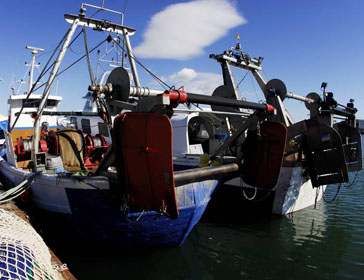 The extensive use of Bottom Trawling and dredges  for commercial fishing causes more direct and avoidable damage to the ocean floor — including deep-sea coral and sponge  communities and other unique and sensitive seafloor marine life — than any other human activity in the world.

Bottom trawls and dredges are so destructive because they effectively clear-cut everything living on the seafloor. Trawls and dredges use large, heavy nets kept open by doors, weighing as much as several tons each, many of which drag across large areas of seafloor to catch fish that live on or near the ocean floor. Fishermen use trawls to catch species such as shrimp, cod, haddock, flounder,, pollock  and rockfish. Dredges are used to catch scallops, clams  and other similar species.

Trawling is a particularly destructive fishing technique in terms of discards, bycatch, and collapse of fish stocks, causing serious damage to delicate marine ecosystems. The trawling fleet is estimated to represent a total of 15,000 of the 100,000 vessels in the European fleet. In terms of destructive trawling however, the impact greatly exceeds this percentage.

European trawlers do not only operate in EU waters. A significant number of European trawlers operate around the world, fishing in both third-country territorial waters and on the high seas.

In fact, the trawling fleet continues expanding its activity. As fishing techniques become more sophisticated and traditional fishing grounds become depleted, European trawlers look for new fisheries in deeper waters. Scientists have already raised the alarm about the overexploitation of many of the target species, such as the orange roughy and the roundnose grenadier. Bottom trawling has also seriously damaged fragile ecosystems like cold-water corals.

New regulation 2371/2002 of the Common Fisheries Policy requires the EU to protect the marine environment and reduce the impacts of fishing on its ecosystems. Oceana believes that important measures can be implemented to achieve this commitment, reducing the impacts caused by the EU trawling fleet.