Paradoxically early twenty-first century man has been able to reach the moon and is now exploring Mars, but unaware of the wonders hidden in the depths of the oceans. Instead of being called Earth, our planet should be called water, because the liquid element covers almost three-quarters. O Planeta Azul because, seen from outer space, resembles a huge ball of that color. But the seabed remains the great unknown, even to scientists, either for lack of resources or because the underwater robots and other necessary tools required for exploration are highly expensive.

The purpose of this information is to present in a way simple and pleasant, the three major areas that are divided from a scientific standpoint marine waters and some of the emblematic creatures that thrive in each of these areas: light or photic zone ( white shark, dolphin bottlenose , porcupine fish, loggerhead turtle , starfish), penumbra or disfótica (octopus, jellyfish , sperm whale) and midnight or aphotic zone (viper fish, pelican fish, monkfish deep). AREA OF LIGHT Millions of plants and Animals live in the oceans, from tiny plankton organisms to giant blue whale over 30 meters and 120 tons. Most marine life is concentrated in coastal areas and in the upper layers of the oceans where, thanks to the entry of sunlight, plants can perform photosynthesis, thereby generating the vital support for the base of the chain food. These brighter marine sites are known as photic zone.

White shark (Carcharodon carcharias ) This shark one of the largest predators of the sea and the world’s third largest fish. But prefers cold water, you can be found in temperate seas like the Mediterranean . Unlike most fish, this is a warm-blooded animal. Size: 6-8 meters. 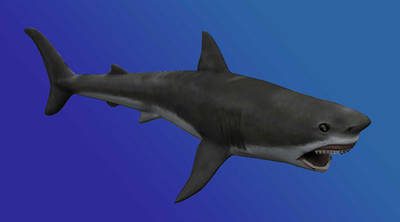 Bottlenose dolphin   (Tursiops truncatus )
This c etáceo usually live in small groups and be pretty coastal, though sometimes concentrate on flocks of hundred copies and enters the high seas. You can detect prey by sight or by sound produced through his head. These sounds also serves to communicate with their peers. Size: 3.5 meters. 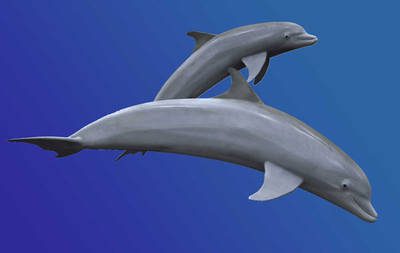 Loggerhead turtle   (Caretta caretta )
Their paddle-shaped fins allow these reptiles move gracefully in the water. These turtles can stay underwater without surfacing to breathe up to two hours and perform migrations of thousands of kilometers until they return to nesting beaches to lay eggs. Size: Up to 1.3 meters. 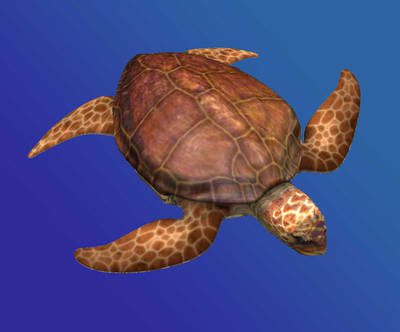 Starfish (Astropecten aranciacus )
Sea stars move very slowly on the seabed. They feed on mussels and clams. With strong suckers on its tentacles open the shells of mollusks, and after pushing their stomachs out of the body through the opening they have in their ventral eat their prey. Size: 30 cm on average. 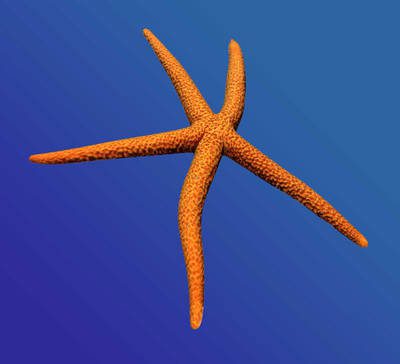 Porcupine fish   (Diodon histryx )
To protect themselves from predators, this fish inflates like a balloon putting their spines straight. His mouth has a peak that allows you to break the hard shell of shellfish. He likes clear water and moves slowly. Size: Up to 90 centimeters. 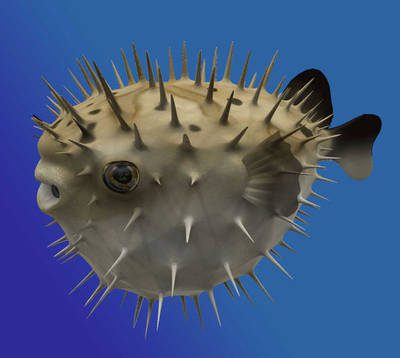 Penumbra
At greater depths the light grows dim, creating what is known as disfótica area. Here the plants can not get enough solar energy and therefore not developed, forcing the animals from these places to develop other strategies to survive and adapt to the dim light, increasing atmospheric pressure and low temperatures. Sperm ( Physeter macrocephalus ) is the whale descends deeper and may reach over 2,500 meters and stay without back out on surface for over an hour and a half. At these depths is feeding giant squid that can be the same size as the sperm whale. Size: Females 11 meters, males 18 meters.

Octopus   (Octopus vulgaris)
All cephalopods have tentacles with suckers. The octopus uses to slide across the floor of the ocean, feel, touch and capture prey.It is one of the most intelligent marine animals that exist, and can change their color and appearance to blend. Size: 60 cm. 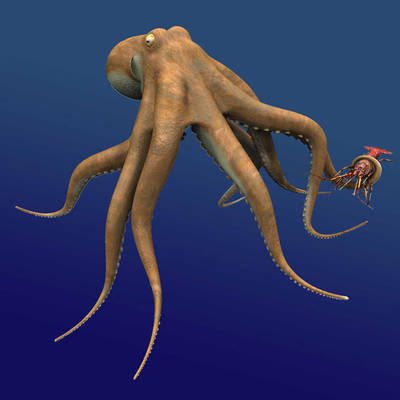 Medusa   (Chrysaora hysoscela )
The Medusa have long tentacles filled with thorns that act as a defense and to capture prey and cause a strong hives humans if they come into contact with them. 95% of your body is composed of water and travel through the seas carried away by the currents. Size: Up to 50 centimeters in circumference. 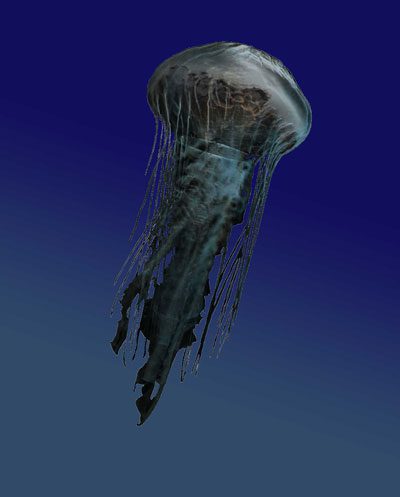 AREA MIDNIGHT
In the aphotic zone or total darkness, which can reach depths of 14,000 meters in the deep abysses unique life forms develop.Besides surviving thanks to the “rain” of organisms and organic material sinking from the upper layers, there are bacteria that, because of the lack of sunlight, perform chemosynthesis (get the energy of chemical substance). The species found here live in icy waters, with a crushing atmospheric pressure up to most animals on the planet. Many of them have developed systems to generate their own light with which they communicate, camouflage or capture their prey. viperfish   ( Pacific viperfish ) found at depths of over 4,000 meters. Have more than 300 light-producing organs throughout the body, mouth and stalk some species have on their dorsal fin. The jaw is so large that it must dislocate to swallow their prey. Size: 25 cm.

Rape deep (Melanocetus johnsoni)
Rape deep attracts its prey with bioluminescent light on his head. Its red color makes it virtually invisible. Males are infinitely smaller than females. In many species of anglerfish deep males they end up living as parasites on the females. Size: Females 15 centimeters;male less than one centimeter. 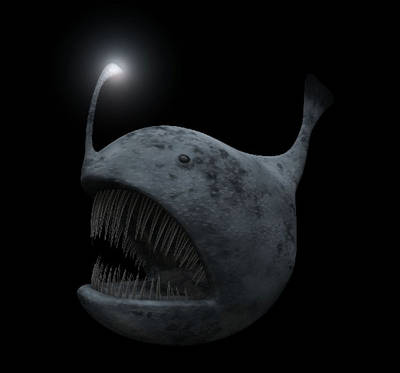 Fish Pelican   (Pelican eel )
This strange eel-like fish swallows its prey with its huge mouth. You can expand your throat and your stomach to swallow fish and large crustaceans. They have numerous teeth in the jaw and at the end of its tail has a light organ. Size: up to 80 cm. 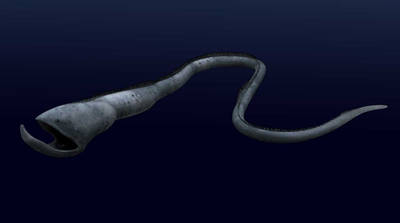