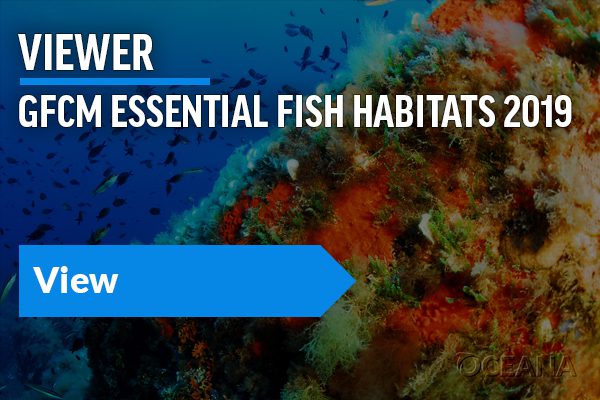 EU fisheries ministers continue to disregard science and to overfish stocks on the basis of short-sighted socio-economic arguments. It is undeniable that the Union’s Member States must act immediately to stop overfishing and to recover all stock above healthy levels by 2020, at the latest. To achieve this objective, an effective protection of Essential Fish Habitats is needed. Safeguarding sensitive and critical habitats at certain life stages of overfished species will, in turn, contribute to the recovery and health of fish stocks. Sustainable management of fisheries could increase European catches by 57% (or 5 million tonnes) within the next 7-10 years. More fish in the ocean would mean more jobs in the fishing industry and more healthy fish on our tables.

The ecosystem approach to fisheries management and the political context

In the frame of the overall goal to end overfishing and reduce bycatch significantly, the requirement to conserve and enhance EFH completes the foundation for an ecosystem approach to fisheries management.  That recognises the complexity of ecosystems and the interconnections among its component parts, so it usually refers to bycatch mitigation, multi-species management, protection of vulnerable ecosystems, and integrated approach. Several fisheries policies and legislations worldwide have already included the protection of EFH, e.g. FAO Code of Conduct for Responsible Fisheries (1995), the US Magnuson-Stevens Fishery Conservation and Management Act (1996), the MedFish4Ever Declaration (2017). Also, the European Common Fisheries Policy (CFP) establishes the ecosystem approach as one of its policy pillars to the ecosystem approach (Art. 2.3), and in particular, when adopting regional multiannual plans, specific alternative conservation measures based on the ecosystem approach shall be included for some of the stocks it covers (CFP Art. 9).

Science shows that human activity, such as trawling and sand dredging, are the main culprits behind the unhealthy state of seafloor habitats, which ultimately leads to the destruction of EFHs. Corals and sponges are particularly sensitive as often they grow only a few millimetres per year.

Bottom trawling is a widely-used fishing technique that is significantly responsible for a permanent disturbance of seafloor habitats, including Essential Fish Habitats. It is one of the most widespread and most destructive fishing practices, dragging everything it meets on its way.

Sand dredging is a notorious activity that uses heavy machinery to extract sand from the ocean floor. For decades this technique has been threatening the ecosystem in the Sound, a strait shared by Denmark and Sweden. It also occurs on shallow sandbanks along the entire Danish coast. In the Sound, dredging is not permitted in Swedish waters, but in Denmark, poor regulation and short-term economic interests have led to serious damage to the seabed and the marine life there, in areas that are feeding and nursery grounds for popular species, such as cod and plaice. According to International Council for the Exploration of the Sea (ICES), the recovery time frame of intense sand dredging areas varies from more than 10 years to “never”. Such a “never” scenario can be seen in Lomma Bay in Sweden, where the area was last dredged in the 1950s and sadly has not recovered.

In Europe, the Common Fisheries Policy recognises the importance of EFHs, and most importantly, their effective protection to contribute to rebuilding and exploiting fish stocks sustainably by 2020. This a legal target to be reached before 2020, at the latest. Specifically, Article 8 of the CFP  recognises the importance of Fish Stock Recovery Areas (FSRAs) to achieve this.

But in order to turn science into reality, we need good management. That’s why EFHs need to be implemented in the context of multiannual management plans (MAP) that set clear stock recovery objectives. The EU is still far from implementing an ecosystem approach to fisheries management. So-called fish stock recovery areas (FRSAs) have unjustifiably received little political attention, and very little progress has happened so far, despite considerable scientific work conducted and invested over the years (Marea; MediSeH; Mantis; Balance; EFH-GIS; MaPACo).

The protection of EFHs through establishing FRSAs, a conservation measure described in Article 10 of the CFP, has not yet been included multiannual management plans for the Baltic and the North Sea but has been included in the Strait of Sicily, where 3 fish nursery areas have been protected.

Case Study: Protection of Essential Fish Habitats in the Strait of Sicily.

In 2016, during one of its expeditions, Oceana documented bottom trawling footprints in the Strait of Sicily (an area in the Mediterranean Sea that is shared by Italy, Malta, and Tunisia) in areas crucial for the reproduction of important commercial species, such as the overfished European hake and deep-water rose shrimp, which are among the most overfished stocks in the region.

Up to 50% of the hake caught in the Strait of Sicily is undersized, which means these fish will never have a chance to reproduce. With the aim of recovering the totally overfished stock, Oceana calls for urgent protection of the relevant EFHs for this species. Following Oceana’s proposal submitted in 2015, today, three nursery areas for hake and deep-water rose shrimp in the Strait of Sicily are totally closed to bottom fish trawling. 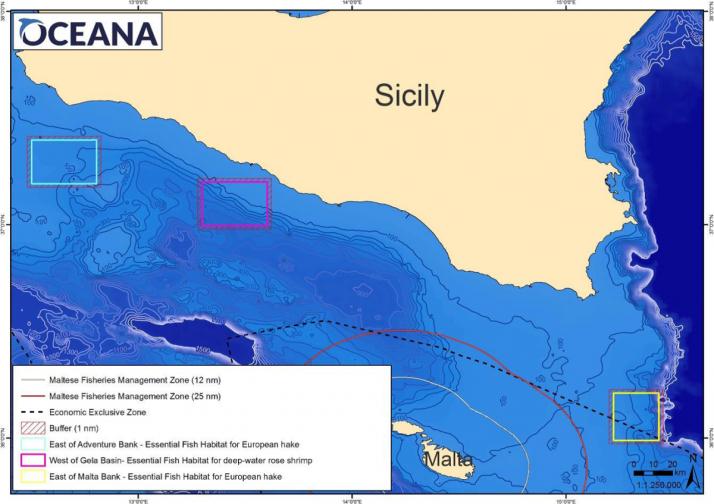 This is just the first step on the way to rebuild the most overfished species in the Mediterranean and provides an opportunity for “baby” hake, to grow and reproduce. Our proposal has been seen as the most appropriate measure so far for hake to recover and has also been backed by the fishing sector operating in the Strait of Sicily.

Oceana has been working the need for marine protected areas (MPAs) in the Mediterranean for many years.