Divers lose heat very quickly underwater. Neoprene diving suits are designed with specific thickness, to be worn in different dive areas and depending on water temperature. There are long and short suits. For instance, diving in a reef area in a short diving suit is not recommendable, because of the many stinging animal found there, such as jelly fish, corals, sea urchins….and neoprene can also serve as a shield.

In todays dive-planned after we have been anchored for seven days in Saint George, because of strong winds that forced us to heading here before we had planned- Oceana divers will wear 7 millimeter-thick diving suits, as it is cold, even when the sun is up. “In Bermuda waters during this time of the year, five millimeter diving suits are not thick enough”…indicates Sole, one of the divers from ZOEA who is participating on our Oceana expedition. They wear these suits regularly, which are also “wet” suits, because in the process of submersion, a fine layer of water is caught between the suit and the skin. Since this layer of water does not circulate, it warms up and acts as a thermo-regulator”… Sole goes on explaining. There are other type of diving suits called “dry suits” which divers wear on top of their regular clothes and a third intermediate type, called semi-dry. 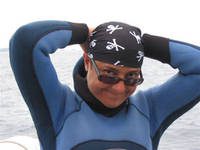 Once the suit type is selected, diving shoes and hood are two basic items in the diving gear. The diving shoes are made of neoprene with sole, which facilitate fitting the fins, in addition to serving as protection from cold temperature; the hood also serves this purpose. Mar, Oceana camera person prefers to wear a hankerchief on her head, like a pirate. Today she is just launching a brand new one.  “I only wear those given to me by friends, they bring me luck” she says. In effect, she has been lucky. While filiming a Portuguese Man-o-War (Physalia physalis) barely a hand’s length away and while absorbed in her activity, the animal’s tentacles coiled around the case of her camera, so tighthly that she had to remove it with the back of her safety knife. Houss, who is also in charge of photography, also lends Mar support while underwater, this time he kept an eye on her, and when things started to get out of hand, he helped her separate from the animal. 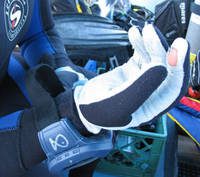 The diving glasses are, of course, an essential element. Choosing one obeys to very personal needs. Mar’s for instance, are optically suited, since she suffers from myopia. But despite her myopia and particular sensibility underwater, Mar films astounding, amazing images.

The gloves also serve as protection from the cold and possible accidents underwater, but they take away sensibility. Houss and Sole, for instance, do not wear them. But Mar-this is another of the unique traits-does. I notice two large holes on her right glove’s index finger and thumb. It is no that they just ripped, no: “I ripped them on purpose, to gain sensibility on my fingers to better handle the camera”. Today, her fingers were peeking out of the gloves, impatient before diving. Mar had not filmed underwater since the Bahamas incident, when the camera humidity alarm went off and the camera flooded. 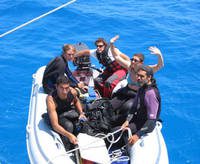 Ricardo comments: “Carlos, even if we take the large dinghy, lets have the small one ready in case someone comes out of water feeling cold”. He looks after the divers. He will do some snorkeling, wearing two diving suits, a long and a short suit, to be prepared. Before submersion, as always, he and Mar exchange information.

– The wind is calming down once again.

– And according to the forecast, it will be like this until Saturday.

But I better tell what happened during the dive tomorrow.