Let’s get back to the ship!-Ricardo calls out.  In the fraction of a second my brain processed the authentic meaning of those words: “Danger, sharks”! My companion points down with his fingers, ten or twelve meters to the left. Right where the reef ends and a deep underwater ravine of sandy floor begin, I see the animal emerge. If I had been able to scratch my eyes underwater I would have. But after the moment of fascination, a visceral fear began. Trying to move calmly, I hit my diving companion, who pushed me towards a shallower rocky area. Barricaded from that position, where the shark would not reach us so easily, we observe it passing by with a mix of elegance and mightiness, in control of its territory. We are the intruders.

At a gesture from Ricardo, we emerged, instinctively looking toward the ship to calculate the distance we had to swim to reach it. We were only 60-70 meters away, but it seemed very far. I was afraid that more sharks would come while I was swimming and I may be attacked. “Now, let’s go!” Ricardo calls. I looked down just as I began to cross the sandy watercourse, when I saw another shark coming from the right side, this time, only five meters away. I grabbed my companion’s hand and pressed hard, getting as close to him as I could, while the splashing underneath seemed an eternity. It felt like we had lead around our legs. I decided not to look down again and as we had just ten meters to go, we began to swim master. I did not know then, Ricardo told me later, but we had a third shark on our left side. 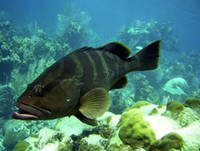 Except for this small reverse, everything has been very good for the Oceana expedition members. We had decided that while the divers filmed and took photographies underwater, we would remain on a shallow water reef called Coral Caverns, locating the Nassau Grouper (Epinephelus striatus). Contrary to other similar reefs we have documented (where juvenile animals were abundant), in here we found greater numbers of adult specimens of rather large dimensions. 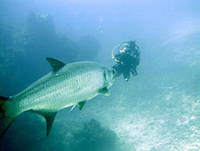 We saw parrotfish there (Scaridae), displaying the characteristic colors of these species during their reproductive periods. “Similar to the parrotfish species, many reef animals have very different aspects and colors throughout their lives, from the moment they are larvae to maturity”, explains Ricardo, while he shows us the species guide where we can clearly see the different development stages of these animals. We also sighted several Queensland Groupers and Tarpons (Megalops atlanticus) a fish that seems like a fresh water species, with gigantic scales, they can grow to reach two meters long. In the words of the filmmaker, Mar: “They are spectacular, they seem prehistoric for their size and appearance” 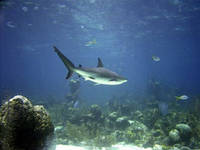 The exceptional is for them to attack

Everyhing was like this, until the sharks decided to come to the spot we were at and not where the divers waited for them. The first to come was a Sandtiger Shark (Carcharhinus leucas), species that is included in the so called “shark triad”, together with the Great White Shark (Carcharodon carcharias), and the Tiger shark (Galeocerdo cuvieri). The other two sharks to come were Reef Blacktip Sharks (Carcharhinus limbatus).

The truth is, seeing a shark is always awe inspiring, but in the majority of cases, they are totally harmless: the strange thing, the exceptional thing if for them to attack. That does not mean we must not take precautions. It would be the same if we were in the savannah and we saw some lions. In particular when, as it is this case, there is a Tiger Shark measuring over two meters, just passing by us.

The experience we had in Coral Caverns had been so constructive, that we decided to come back in the afternoon for another diving session. We were not counting on a new unexpected occurrence: just as the divers jumped in the water, the humidity alarm in Mar’s camera went off.