Protecting the Marine Area of the Canary Islands

Today was a big day for us – we presented our proposal to protect 15% of the marine area around the Canary Islands. If our proposal is accepted, it would multiply the current protected area by 100. 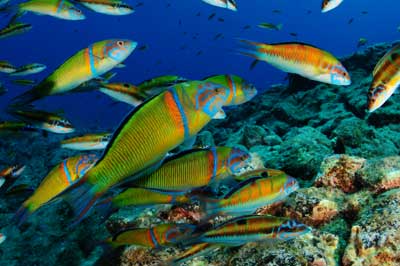 As some of you may know, the United Nations Convention on Biological Diversity requires effective conservation of at least 10% of the world’s marine and coastal regions by 2012. This date was postponed until 2020 at the last Conference of the Parties held in Nagoya (Japan) because participating countries were not complying. The EU’s Habitat’s Directive also calls for the protection of a portion of Europe’s marine surface. Unfortunately, member states are severely lagging in meeting their objectives.

Oceana Scientist Ana de la Torriente has this to say about the initiative: “Protecting marine areas facilitates reproduction and provides shelter for a variety of marine species, including species of commercial interest. As has already been proven in some of the archipelago’s protected areas, a “reserve effect” generates increased abundance of larger fish in adjacent areas, which benefits the fishing sector while controlling the growth of the lime urchin, one of the archipelago’s greatest threats.”

We spent a long time studying and identifying the rich diversity of this area, and it is our hope to see it protected and managed well.