About an hour ago we anchored off Great Salt Cay, halfway to Abaco Island, to spend the night. Nuño decides that we cannot keep sailing without light because from here it is dangerous to sail at night. The waters in this part of the Bahamas are shallow and although the Oceana Ranger, like almost all catamarans, hardly sinks in the water (a meter and a half), there are stretches where the depth doesn’t reach one meter. Apart from the risk to the Ranger, another important consideration is potential damage to the corals and sponges so abundant in these waters. In the Ship’s Log they’ve marked this as a “dry area.” David, the mechanic, changes the salt water pump of the port motor, because it has broken. 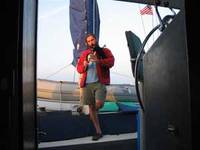 Throughout the day the captain and Carlos have been very attentive to every potential obstacle. Carlos at the helm, listening for the orders Nuño gives from “monkey island.” “Monkey Island” is what sailors call the platform just above the cockpit. Although the catamaran Ranger glides very slowly over the calm water,  intensely turquoise, at the smallest lapse of attention we risk running aground in the sand.

We pass Mangrove Key on the starboard side. Carlos has to spin the wheel at the helm often.

“Bottom 6!” he shouts the depth in feet from the cockpit. 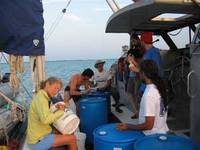 Attracted by the music, Mar Mas has emerged from her cabin. She had been down there for hours, editing the powerful footage she filmed a few days ago in the Florida Keys.

I am writing this chapter to the strains of a bagpipe. It belongs to Nuño, though he sometimes shares it with Carlos. I can’t restrain myself and leave the “messroom” to join the group outside. The music has infected the crew: improvising with whatever is at hand (Indi, the kitchen mortar; Annie, an empty bottle; Carlos, Ricardo and José Carlos, their hands on gasoline cans – empty, of course) they have formed a first-rate ensemble – the Ranger band.