The Danish Minister of Environment, Kirsten Brosbøl, and the Minister of Food, Agriculture and Fisheries, Dan Jørgensen, have submitted a joint proposal to establish six new Marine Protected Areas (MPAs) in the Kattegat in order to protect its soft-bottom habitats. Soft-bottom represents around one-quarter of the Danish part of the Kattegat but currently remain completely unprotected. Soft-bottoms are not covered by the European Nature Directives and are therefore particularly susceptible to human threats. One of the biggest threats is bottom trawling which damages the seabed and can take years before soft-bottom habitats recover once a trawl has passed by.

Therefore Oceana is delighted that the Danish government has decided to establish new MPAs in the Kattegat, with the aim of protecting soft-bottoms from fisheries – an issue we have lobbied for since 2011. Four of the six areas are covered by Oceana’s “Kattegat trench” MPA proposal. The government’s proposal covers sites where Oceana have previously documented Haploops, horsemussels, the sea sponge Suberites virgultosus, and sea pen; some of which are threatened or rare. However, we are concerned that the proposed areas of the new MPAs are too small and that the Kattegat will not achieve a Good Environmental Status in 2020, as required under the EU’s Marine Strategy Framework Directive. The Kattegat has long suffered as a direct result of many years of destructive activities, including bottom trawling for Norway lobster, and it will take more than these small areas to allow the sea to recover. Researchers from Aarhus University have recommended that the government protects larger areas, including the entire Kattegat trench, in which Haploops are found. Very disappointingly, the government has decided to take the side of the fishermen, not nature.

The government’s proposal to establish new MPAs in the Kattegat has been in public hearing since the winter. Oceana, together with other major conservation organisations, submitted a hearing statement about the proposal a couple of weeks ago. In this statement, we emphasised that the Government’s proposal is not enough to secure the protection of the Kattegat’s marine environment. We also point out that the Government has paid too much attention to bottom trawling fishery, instead of focusing on improving the overall status of the marine environment.

Last week, I attended an open consultation session in parliament, where the two ministers were questioned. The political party Venstre, who are known to be pro-fisheries, organised the consultation as they were worried about the proposed measures for the six areas. They presented a number of arguments and questions, some more credible than others. However, the two ministers defended the proposal for the six new areas which was good to see. At the end of the consultation, Minister Dan Jørgensen stated that it was interesting that Venstre did not once mention the environment once during the consultation. Given the upcoming election in Denmark later this year, one cannot help but worry about the future of Danish marine environments if Venstre manages to seize power. 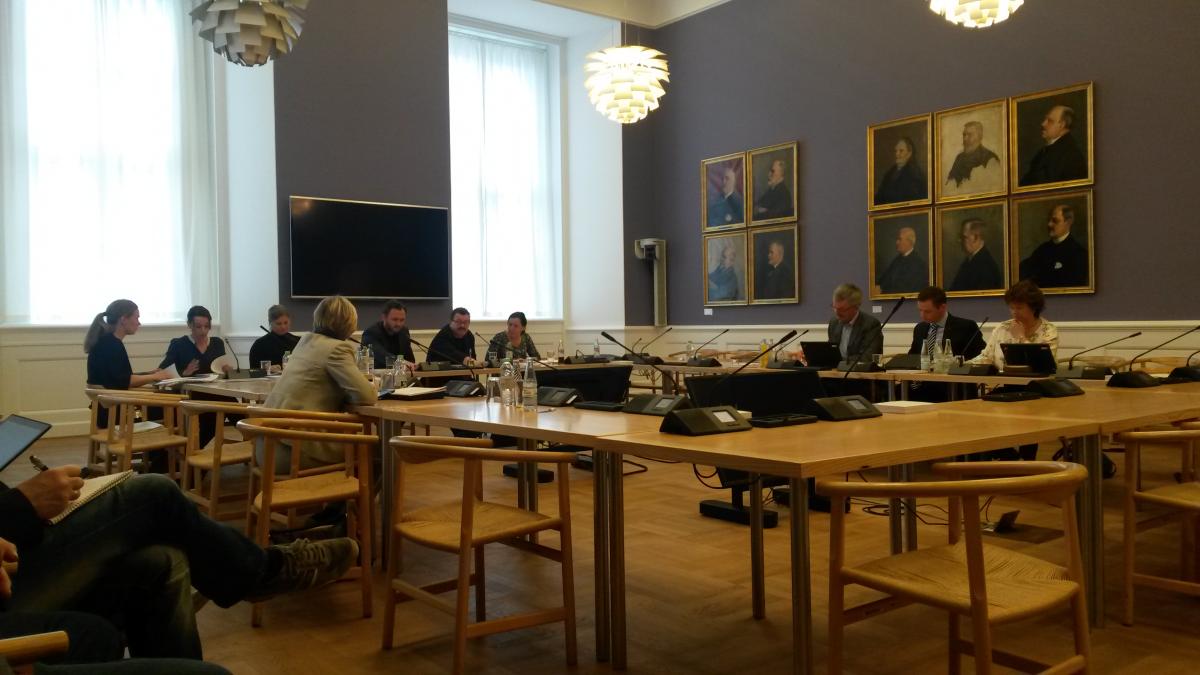 Ministers Kristen Brosbøl, second from left, and Dan Jørgensen, fourth from left, during the open consultation in the Danish parliament.