After having left the Panama Canal and the dozens of anchored boats waiting at Colón to pass through to the Pacific, we set our course northward through the waters of Panama, Costa Rica and Nicaragua. We have traveled almost 400 miles since then and, except for yesterday, when we had, at some moments, waves higher than two meters, the sailing has been fairly calm. We’ve kept a good distance from the coast; perhaps it is for that reason that we have seen practically nothing – neither boats nor dolphins, and hardly any seabirds. Only three gulls (Larus spp.), two shearwaters (Puffinus spp.) resting on drifting wood, and a royal tern (Sterna maximus) that crossed our prow. This area of Central America is the famous – but little visited – Mosquito Coast, popularized a decade ago in the Harrison Ford film (based on the novel by Paul Theroux) where Ford plays an adventuring father determined to create an ice factory in the middle of the jungle.

Aside from this, we’ve had to content ourselves with the flying fish (Exocoetidae), which, it’s clear, lent their name to French ” Exocet ” missiles – best known, sadly, for their use during the Falklands War – for their low, razor-sharp flight across the waves.

The scattered spots of seaweed that we come across on our route are not dense and are distributed in irregular patterns. We collected a few samples to identify and to observe up close. They were well-known species like Gulf seaweed (Sargassum fluitans), a brown seaweed that does not live fixed to the substrate but rather continually drifting. We also saw a few “bunches” of another brown seaweed, Cystoseiracea Turbinaria turbinata.

The stalks of the seaweed that we’re finding are frequently colonized by little lepadomorph cirripedes (little barnacles), bryozoans and minute annelids. Underneath the floating seaweed there are usually little fish and larvae. This is a common behavior for many small marine organisms, which use anything that floats – including trash – to hide themselves under, taking advantage of the protection from predators.

Right now we are north of the coast of Nicaragua and we have met the first fishing boats. They appear to be trap fishermen,  possibly for the capture of Caribbean lobster (Panulirus argus), which is an extremely important fishery in this zone.

The two-meter waves and turbulence left the novices in a bit of chaos for a few hours, but once the motion sickness passed we were in fine spirits once again, trying to see everything in sight of our binoculars between one guard and the next.

Now we continue on our way toward Cayos Cochinos and the Bay Islands in Honduras. It is an area of great biological richness where we hope to observe the state of the corals and see how they are recovering from the two episodes of bleaching they suffered during the 90s and from the damage done by hurricane Mitch.

Cayos Cochinos is a beautiful group of keys and islands located near the coast. It is a true paradise; two of the islands have been preserved in their natural state and have not been exploited because they are difficult to access. The keys have a diversity of riches, which at the marine level begins with the most virgin reefs in Honduras. They also have a wide variety of flora and fauna on land.

While we are heading to La Ceiba, the location in Honduras where we were planning to complete the immigration and customs procedures, as well as to get in touch with our colleagues at the Honduran Foundation for Coral Reefs (Fundacion Hondureña de los Arrecifes Coralinos), we meet, first thing in the morning, more fishermen – those we saw during the night. And at dawn, a shearwater on a plastic jar that is floating near us. 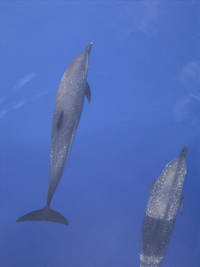 Around ten in the morning two spotted dolphins appear (Stenella frontales), but they stay hardly a half a minute and then pass on. Two hours later the two creatures return and this time they remain with us a longer time. The larger of the two has the clear spots that make this species distinct covering almost its entire body, but the younger dolphin only has a few.

The wind is not favorable, so we hardly use the sails and instead travel with the motor most of the time. The Ranger has two 150-horsepower Isuzu motors, which gives us an average speed of six and a half knots.

Once we have recovered our appetite, lost during the past two days’ swells, we prepare a meal of definite Mediterranean character: ham, cheese, and bread with olive oil and garlic, which tastes heavenly to us and gives us sufficient energy to tolerate a few more hours under the sun.

In the afternoon, a few frigate birds (Fregata magnificiens) begin to fly over us and, of course, there are still our friends, ever-present during these days, the flying fish.

We have a little problem with our fresh water, so we interrupt the crossing for a moment, shutting off the motors and searching for the fresh water leak. We all take advantage of the moment to take a dip; the sun is intense.

We start the motors once again, course 270 º W. Soon we will arrive at La Ceiba, and from there to Cayos Cochinos.