Perhaps it would do well to give you all a little background in how fishing opportunities are set in the EU for the Atlantic, before I get to the point.

Every year, scientists from the International Council for the Exploration of the Sea (ICES) get together and use whatever data is available to determine the state of the stocks, and the catch limits, or Total Allowable Catches (TACs) that should be set to guarantee the sustainability of the resource. Their scientific advice becomes the basis on which the Commission develops its own proposal for TACs, which it then submits to Member States.

Once the Member States have the Commission’s proposal, they get together, as they did last week, and begin negotiating.

Unfortunately, year after year, this is the point at which, precaution is usually thrown out the window in favour of short term economic objectives. This year was no exception. European Fisheries Ministers ignored 41% of scientific advice in setting 2012 fishing limits, and exceeded Commission recommendations by 22%. Given the fact that 63% of Atlantic stocks are overfished, the ministers’ decisions do not bode well for a CFP reform that is meant to reverse the damage we have already inflicted on Europe’s marine resources.

Take for example Cod, a fish we are all very familiar with in Europe: 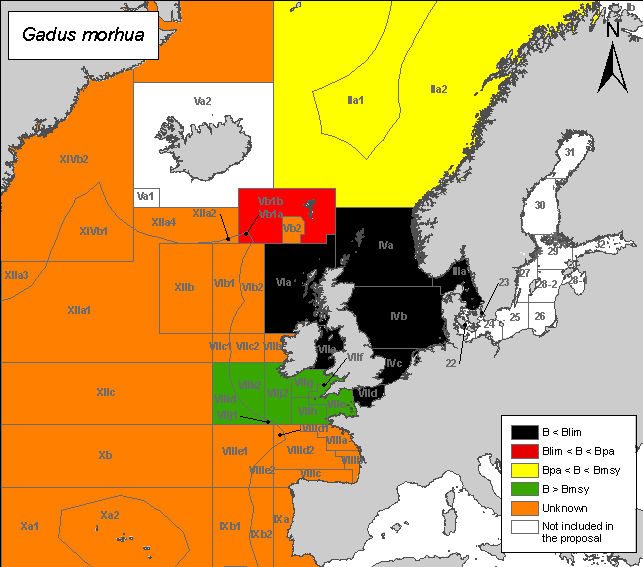 In all orange areas in this risk map (developed by Oceana earlier this year), the actual state of the stock is simply unknown and the green areas correspond to the only ones wherein cod catches comply with scientific advice. It’s not looking good is it? And if you take a look at our report, you’ll see that the situation for many other stocks is no better.

Xavier Pastor, executive director of Oceana in Europe sums it up: “It is useless to reform the Common Fisheries Policy if Member States are unwilling to comply with its principles and guidelines”.

The point is, we know that these are tough economic times, and right now “environmental” issues are the most likely to be brushed aside as jobs and the economy become the priority. Unfortunately, this issue is not “just” an environmental issue, it is an issue that will affect both the social and economic fabric of our society. If we do not bring Europe’s fisheries resources back from the brink, if we do not manage them sustainably, and if we continue to focus on the short term, we are putting the future of the entire fishing industry, and the communities that depend on it at risk.

What do you think?