Today we documented a zone of mud and fine sediment situated between the protected area of the Cayos Cochinos archipelago and the Honduran continental coast. This is the site of a good deal of illegal trawling, for many of the shrimping boats do not respect the legal fishing distance from the coast.

These areas are rich in green algae, like those of the genus Caulerpa as well as “chupachups” (Rhipocephalus phoenix) and a few spots of marine sea grass. Afterwards, we returned to Mariposales. 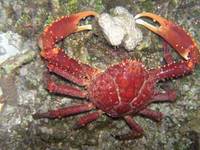 This time we did find crinoids, or feather stars, something which we have been wanting to document since we began the expedition. These echinoderms are spectacular and, inevitably, pull our imagination toward Jurassic times, the era in which they dominated a many marine ecosystems. On this occasion it is a black and white crinoid (Nemaster grandis). A little further, another echinoderm, in this case a cushion sea star (Oreaster reticulatus).

Today seems to be the day of the invertebrates; we’ve also seen bearded fireworms (Hermodice carunculata), a few anemones that we haven’t yet identified, and we paused to film in greater detail a few corals and a giant barrel sponge (Xestospongia muta) –  but a small one.

A few spiny squirrelfish (Holocentrus rufus) hide in the crevices, along with a few Caribbean lobster (Panulirus argus). And not far away, a couple of long-spine urchins (Diadema antillanorum).

Playing among the gorgonians, a few trumpetfish (Aulostomus maculatus) and smooth trunkfish (Lactophrys triqueter). But today, besides the usual black with white spots, we also see the yellow variety, which is found  in only a few areas of the Caribbean. And as we return to the boat, we are greeted by a giant barracuda (Sphyraena barracuda) more than a meter long, who – according to what they tell us at the Biological Station – has decided to take up permanent residence in this zone.

Right by the dock we meet a local Garifuna fisherman, in his small blue boat, with a shirt from Milan and red shorts. He is carrying a small red net of light mesh. Under the boat are throngs of larval and juvenile fish that look like flat sardines. He tosses his net into the water above them; it opens like a small parachute. The weights all around its edges cause it to sink slowly. These weights are connected to the center of the net by a nylon cord. When they are all pulled at once, the net closes underneath, trapping the small fish inside. They will be used as bait to capture larger fish. With four of them on a hook, and a few of them scattered in the water nearby, they will lure fish of an acceptable size to be sold in local markets. The coral reefs concentrate the marine biodiversity that allows for the reproduction and development of countless species, some of them of high value – like  lobster, conch, and scaled fish.

In the afternoon we have to prepare. First thing tomorrow morning, much to our chagrin, we will leave the Keys – certainly the most beautiful places I have ever visited.