The EU Habitats Directive is the most important legislation on environmental matters in Europe. This Directive establishes, amongst others, a list of species for which each Member State must create Special Areas of Conservation with specific protection objectives and measures. These areas set up a global European network of protected areas, called the Natura 2000 Network. To date it is probably the most successful conservation tool currently in place, which covers almost 18% of the terrestrial lands.

Unfortunately, this success is hindered by Member States’ poor performance when it comes to the marine environment. With only five habitats and 18 marine species included in the Habitats Directives’ annexes, only a ridiculous 1% of European waters are now protected. The lack of representativity of marine ecosystems in the annexes of the Directive is a real obstacle for Member States to complete their Natura 2000 network at sea. It also reveals the lack of political interest in protecting our marine environment, while more and more pressures on the oceans are putting European livelihoods at threats.

Consequently the marine component of the Natura 2000 network severely lags behind the terrestrial part, in terms of number of sites, size and management:

What is the Habitats Directive?

The Habitats Directive was created in 1992 to address the commitments assumed after the United Nations Convention on Biological Diversity to protect at least 10% of the world ecoregions and as a way to tackle the decline of EU habitats and species. This directive includes measures focused on protecting and recovering the environment and includes five annexes specifying the habitats and species that will be protected.

According to the Habitats Directive, each country must designate Sites of Community Importance (SCI) that will make up the Natura 2000 Network, a European network of protected places for the conservation of important habitats and species. Additionally, every country must include management plans for each SCI, which becomes then a Special Areas of Conservation (SAC).

Apart from the SCIs, created to protect habitats listed in Annex I and species in Annex II, the Natura 2000 Network also includes Special Protection Areas for birds (SPA), according to Annex I of the Birds Directive, focused on protecting birds that temporarily or permanently live in the European territory.

What are the steps necessary to set up the Natura 2000 Network?

Each region was evaluated according to each country’s proposals. A committee, made up of experts from the European Commission, the scientific community and some NGOs, determines whether the proposals are Sufficient or Insufficient, for each species and habitat. If they are Insufficient, the corresponding country must develop new proposals for Special Areas of Conservation (SAC) to be evaluated by each country and the European Commission. In the case of Special Protection Areas for birds (SPA), these are directly included in the Natura 2000 Network, without undergoing the evaluation process.

Currently, all the biogeographically divided terrestrial regions have been evaluated as the Habitats Directive was first applied to land ecosystems, since more information about these areas is available. It is only since 2010 that marine bioregions have also been assessed through the biogeographical process. In early 2011 new sites were designated by some Member States (Oceana PR). Others must further their efforts to create marine protected areas because their proposals for protecting species and habitats were deemed Insufficient. 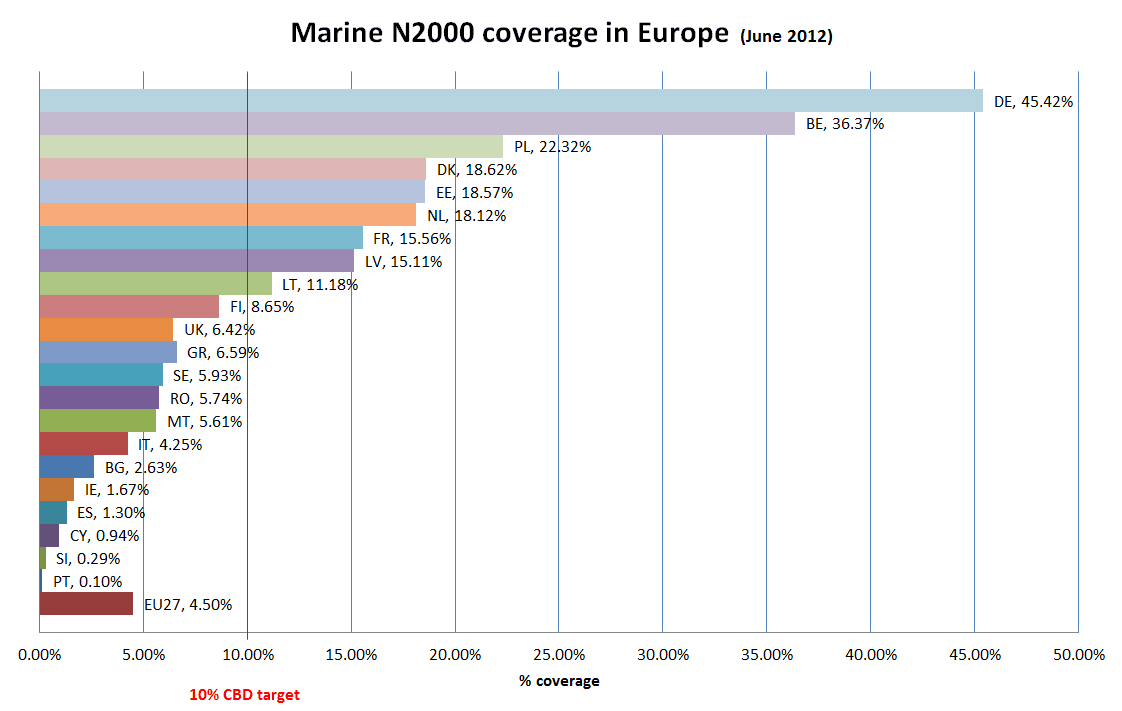 The marine environment in the Natura 2000 network

The annexes of the Directive only include five marine habitats and 18 marine species (see list below). More important marine species like corals, sponges, sharks, and algae must be included due to their endangered state and because many of them are unprotected by international legislation and conventions.

As of June 2012, Europe protects 4.5% of its marine surface and is half-way from complying with its commitments before the United Nations Convention on Biological Diversity, which requires the protection of at least 10% of the marine surface by 2012 (this objective was postponed to 2020 at the last Conference of the Parties in October 2010, but the EU had already committed to achieve this within the initial timeframe of 2012). 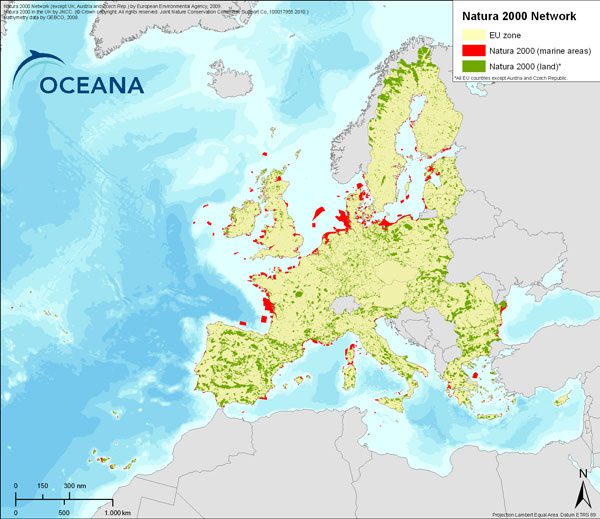 1180 Submarine structures made by leaking gases