The swordfish is an iconic, fast-swimming and peculiar predator of the Mediterranean Sea.

Its fishery (a place for raising and harvesting fish) contributes significantly to the socio-economic activity in the Mediterranean region-especially in Greece, Italy and Spain-where swordfish is consumed the most.

When sold fresh, its price tag can reach up to €24 per kilo.

However, the number of a Mediterranean swordfish has plummeted to critical levels. More than 3 decades of overfishing swordfish in this area has left stocks at only 30% in 2016, with no sign of a recovery.

Many swordfish caught in these waters are too young (juvenile, in fishing terms) to be able to reproduce, putting the long-term sustainability of swordfish at great risk.

Oceana calls on the EU and all Mediterranean countries sharing these waters to table a robust and immediate recovery plan to rebuild the region’s swordfish stocks. This recovery plan must be science-based and be presented at the ICCAT Commission (the international body charged with protecting swordfish) meeting in November 2016, which will determine the amount of swordfish that can be caught in the region (total allowable catches, (TACS)), and so ensure swordfish stocks gets onto the right path towards sustainable levels.

Infographic: How the EU is depleting Mediterranean swordfish

Mediterranean swordfish (also referred to as SWO MED) are fast swimmers and often travel long distances in pursuit of prey. Unlike other fish of its size, Mediterranean swordfish behave differently; they travel alone, or together with their mate, and not in schools (groups of fish). In fact, some fishermen try to catch a female swordfish knowing that a male is not too far behind her.

They are caught in several ways. Some more selectively like (targeting one species and thus not catching other unwanted fish)  using a spear-like arrow (harpoon) that is ‘fired’ at the swordfish,  but the majority are caught by means of large fishing boats called long liners that are equipped with hooks.

For many years, and particular during the 1980s and mid-1990s, the worst way to fish swordfish, or any fish for that matter, was through driftnets. Since 2007, these huge nets have been banned from use in EU Mediterranean waters for highly migratory species like tuna and swordfish. Then in 2009, ICCAT brought in a complete ban came into force for all Mediterranean waters.

Two factors: thirty years of relentless overfishing swordfish in the Mediterranean Sea has wiped out 70% of stocks, and a chronic lack of a management to fish swordfish sustainably and replenish this highly-commercial species.

Three quarters of the swordfish that end up at habour are too young and too small to reproduce. This is because the current minimum legal catch size for fisherman to legally catch SWO MED is set too low-at 90cm-meaning a biological recovery in swordfish numbers in the Mediterranean is near impossible. This is around 50cm smaller (adult maturity size) than the size recommended by scientists.

Oceana recommends a series recovery plan that must be agreed and adopted at the ICCAT Special Meeting in November 2016. There, members of ICCAT will assess swordfish stocks and agree on the total amount of swordfish that can be fished for the next two years, also known in the fishing industry as total allowable catches (TACs).

At the 2016 ICCAT meeting, Oceana will campaign for a recovery plan to include:

For more detailed technical recommendations please check out our 2016 Position Paper: Inaction Is not An Option

Video of Feluche. Artisanal fishermen as watchmen for the Mediterranean swordfish

Read our fact sheet on Mediterranean swordfish and our campaign for a recovery plan. 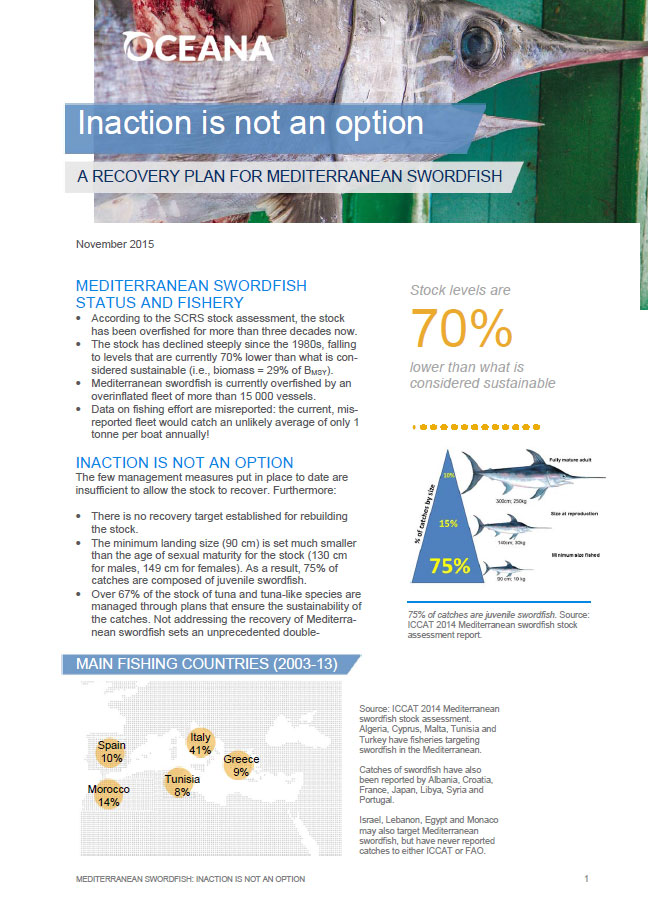 Action not words for future of Mediterranean swordfish

2016 Position Paper: Inaction Is Not An Option.

Oceana says EU should act against true ‘walls of death’

Oceana urges zero tolerance for driftnets in the Mediterranean in 2011

A plea for Mediterranean swordfish

Oceana calls for a definitive end of italian driftnets

Oceana calls for swordfish management before it is too late

Morocco promotes the plan to eliminate driftnets from their fleet

At the premiere of Sea Legend: United against the decline of the great fish

The one glorious swordfish

Adrift! Swordfish and driftnets in the Mediterranean Sea

Oceana recommendations for a sustainable management framework for Mediterranean swordfish

Oceana recommendations for a sustainable management framework for mediterranean swordfish