Over 90 percent of world trade is carried across the world’s oceans by some 90,000 marine vessels.

Over 90 percent of world trade is carried across the world’s oceans by some 90,000 marine vessels. Like all modes of transportation that use fossil fuels, ships produce carbon dioxide emissions that significantly contribute to global climate change and acidification. Besides carbon dioxide ships also release a handful of other pollutants that contribute to the problem.

The shipping industry is responsible for a significant proportion of the global climate change problem. More than three percent of global carbon dioxide emissions can be attributed to ocean-going ships. This is an amount comparable to major carbon-emitting countries — and the industry continues to grow rapidly.

In fact, if global shipping were a country, it would be the sixth largest producer of greenhouse gas emissions. Only the United States, China, Russia, India and Japan emit more carbon dioxide than the world’s shipping fleet. Nevertheless, carbon dioxide emissions from ocean-going vessels are currently unregulated.

Oceana is working to reduce greenhouse gas emissions from the shipping industry by petitioning the government to regulate shipping emissions.

Working with Earthjustice, Friends of the Earth and the Center for Biological Diversity, Oceana petitioned the EPA to regulate shipping emissions in October 2007.

Unfortunately, since the EPA did not respond accordingly, in July 2008 Oceana, along with the coalition of environmental groups and attorneys general from various states, filed a letter warning the EPA of impeding litigation if it does not respond to the petition.

Oceana has the following recommendations to reduce global ship emissions: 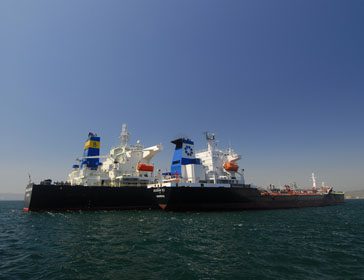