Seafood fraud harms the environment, people’s health and their wallets.

By any other name…

Seafood fraud is harmful to the environment, rips off the consumer and undermines conservation efforts by supporting unsustainable or illegal fishing activities. It can take place anywhere along the supply chain, from the fishermen to the wholesalers, distributors and foodservice. The problem is caused by insufficient enforcement and control of rules on traceability and labelling in European countries, which enable fraudulent practices on seafood to slip through.

This update of Oceana’s 2014 review of seafood fraud studies demonstrates the global scope of the problem, but also reveals some promising trends due to recent regulations in the European Union (EU) that are increasing transparency and traceability as well as addressing illegal, unregulated and unreported (IUU) fishing. An interactive map of the global seafood fraud review compiled by Oceana can be found at www.oceana.org/seafoodfraudmap.

This in-depth examination into global seafood fraud shows that it is still a serious problem, hurting consumers’ health and wallets, and threatening marine wildlife and ecosystems. However, traceability and accountability, where in place and enforced, appear to reduce rates of fraud in the EU. If the United States adopts comprehensive, full-chain traceability, it will be more difficult for bad actors to mislead consumers and exploit our oceans. It could also serve as a model elsewhere. 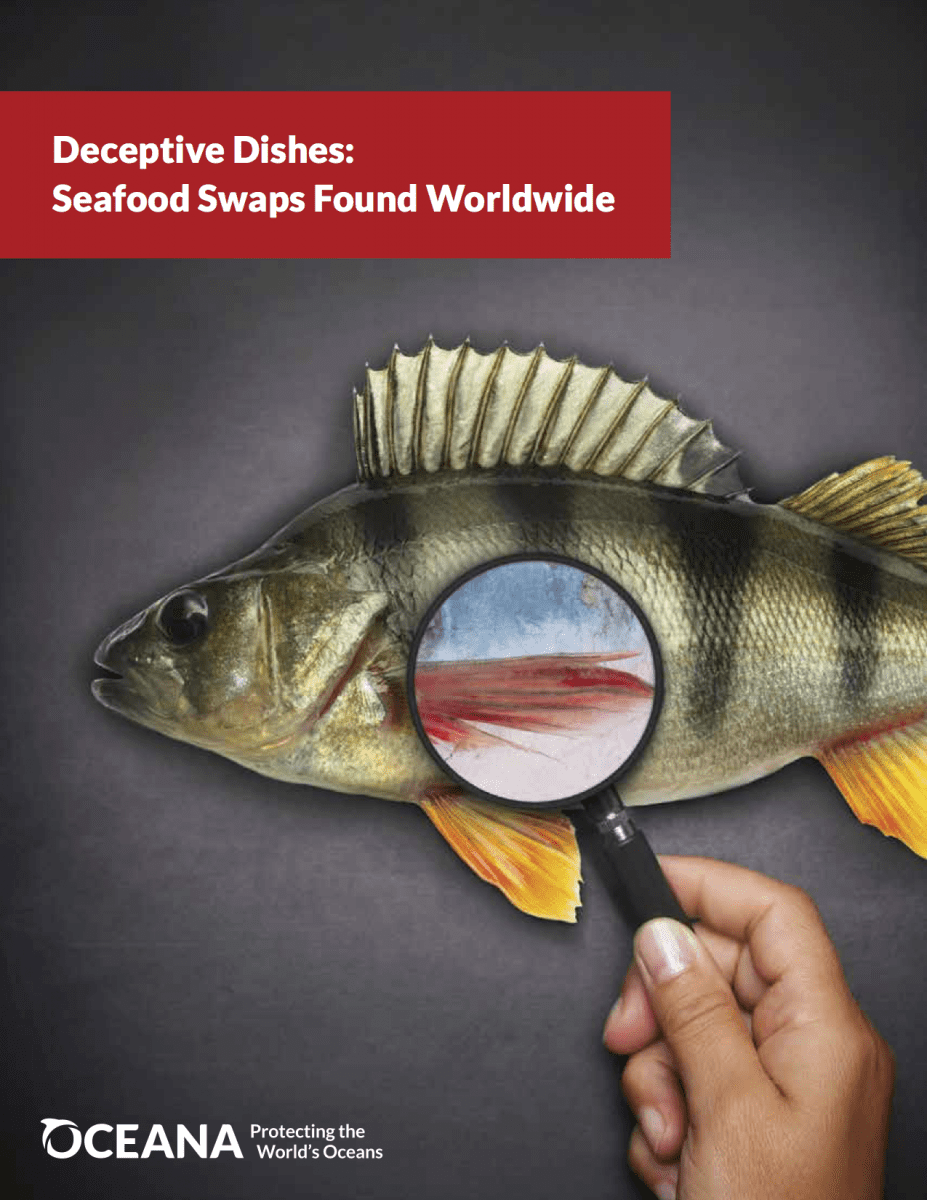 Oceana investigations in France, Denmark and Belgium have all revealed cases of the widespread mislabelling of fish, confirming the notion that seafood fraud is common across European countries, as documented by numerous studies. Oceana advocates for EU governments to guarantee that seafood is safe, legal and sustainably sourced from boat to plate, through a comprehensive and transparent traceability scheme and with clear labelling to consumers. We call on the EU to expand on detailed fish labelling rules that exist for all unprocessed fish and processed fish served by restaurants in order to allow customers to make informed decisions about the fish they eat. Each fish species should be designated with one single name to avoid confusion, as is already the case in fishmongers and supermarkets. Additionally, Oceana advises consumers to be careful when a fish seems too cheap to be true and we encourage them to ask waiters for information about the fish they serve (what species it is, where and how it was caught). Public action in this manner sets the basis for the demand for greater transparency and will trigger a chain reaction towards seafood suppliers.

There are several reasons seafood fraud occurs. Mislabelling is often motivated by economic incentives to imitate a more expensive product (e.g. serving yellowfin tuna as as a replacement for the more expensive and popular bluefin tuna). In some cases, it is also rooted in flawed fisheries management.

EU fish stocks are in an alarming situation, with 48% of North East Atlantic stocks and 93% of Mediterranean stock currently over-exploited. The EU is a major fish market and in 2011, annual seafood consumption per capita was 24.5 kg. The over-exploitation of stocks has affected catches and the availability of traditionally consumed fish decreases, however market demand remains and is met through the imports of similar fish products. Currently, the EU imports about 65% of the fish it consumes.

Oceana advocates for fishing limits to be set according to scientific advice. We believe this is the only way to rebuild EU fish stocks so that they can produce their Maximum Sustainable Yield. This must be reached by 2020 according to the Common Fisheries Policy and will eventually reduce our dependence on fish from third countries.

We also work actively against pirate fishing which is often involved in seafood fraud. Mislabelling may be used to launder seafood coming from Illegal, Unreported and Unregulated (IUU) fishing, which damages fish stocks and marine ecosystems and jeopardises the livelihoods of honest fishermen. Check IUUWatch.eu for current news about this global problem.