Marine phanerogams, coralligenous communities and maërl beds have managed to achieve protection from destructive fishing practices. The biological importance and vulnerability of these ecosystems has been championed by Oceana from the outset.

The characteristics of these ecosystems and their distribution in the Mediterranean are fundamental to understanding the importance of their protection and the giant step forwards that this new law represents. 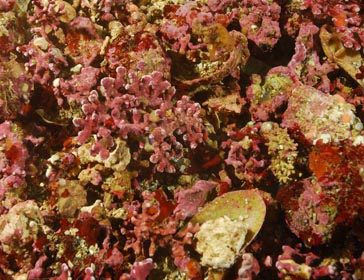 What they are: the name “maërl” comes from Breton and means “marga”, referring to an area of calcareous land or deposits of calcified algae (this being the case). This name covers a marine community made up of red algae with a calcareous structure which form reefs very similar to coral reefs. For this reason, they are also known as coralline algae, although in contrast to true coral they are not created by animals.

There are hundreds of species of coralline algae, but only a few of them form the dense maërl reefs, the most common species being Lithothamnion corallioides and Phymatolithon calcareum.

Coralline algae, which are similar in shape to coral, capture a large amount of carbon dissolved in water and trap it in their cellular walls in the form of calcium carbonate. This is what gives them their characteristically rigid shape.

Vulnerability: the large amount of calcium in these plants (as well as magnesium and other elements) has made them very valuable to agriculture as they can be used to condition over-acidic soils. For this reason, maërl beds have been commercially exploited since ancient times, to the extent of extracting hundreds of thousands of tonnes a year, which has resulted in the deterioration of some sea beds. Maërl is also used in other sectors such as the pharmaceutical, cosmetics and food industries.

The disappearance of many maërl beds is not only due to this commercial exploitation; fishing has also played an important role in their destruction. The importance of these beds as a centre of biodiversity for commercial species has made them the target of different fishing methods. Fishermen from all over Europe have used chains and other contraptions to destroy calcareous algae beds with the aim of “flattening” the terrain so they can use their fishing gear without damaging it and without snagging their nets on them.

But maërl beds are extremely sensitive, and barely have any capacity to regenerate. Some of their characteristics include the tremendous longevity of the algae that form them, their low reproductive rate, slow growth and the time they need to create a proper maërl bed. Studies on the age of some of the individual algae that make up the beds up have estimated this at between 20 and 100 years. Yet to be able to form a colony of algae, and thus a “maërl”, it can take between 1,000 and 8,000 years. In addition, some species only reproduce every 5-6 years. Added to this is the fact that these algae only grow around one millimetre per year.

Distribution: the beds stretch from the Arctic to the Mediterranean and the Black Sea. Recently, maërl beds have been found in areas such as the Macaronesian archipelagos of the Azores and the Canary Islands, the tropical waters of Brazil and even in areas of the North American Pacific off Alaska. Some of the most important maërl beds, and on which there is the most information available, can be found off France, Scotland, Ireland and Galicia, although with advances in marine research, new areas are being discovered.

Coralligenous communities, or the Mediterranean garden 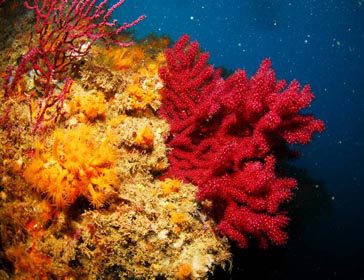 What it is: this name refers to one of the most beautiful and productive ecosystems in the Mediterranean. While the maërl beds are formed by algae, coralligenous communities combine both animal and plant species, where stunning gorgonias (or soft coral), arborescent sponges and erect bryozoans rise up like trees while underneath, like a forest undergrowth, crowds a multitude of green, brown and red algae (sometimes those typical of the maërl beds), along with polychaete worms, ascidias, sea urchins, starfish and a host of other species.

These communities are found in deeper waters than the maërl beds. They tend to start at depths of between 10 and 20 metres and in some places they can reach down to 200 metres. In the shallower areas the algae predominate, but at greater depths, as the sunlight decreases, there is a greater proliferation of the animals that live attached to the substrate and feed on particles suspended in the water. This is the kingdom of corals, gorgonias and sponges, species that capture food with their tentacles or by filtering water through their structures.

There are various kinds of coralligenous communities, depending on whether they are found on underwater outcrops or in caves; in very turbulent areas or calm waters. The huge diversity and range of colours that these communities achieve make them comparable to certain coral reefs.

Vulnerability: coralligenous communities have been exposed to major threats as because a large proportion of them are outside the 50-metre zone protected from bottom trawling, together with the fact that most of their species do not appear in protected species catalogues, large areas have already been devastated.

Recently, different types of Mediterranean gorgonias have suffered from episodes of bleaching similar to those experienced by tropical reefs, with the result that many areas have been seriously damaged.

Distribution: although they can also be found in other oceanic areas, the Mare Nostrum is the finest exponent of this tremendously complex and diverse ecosystem. 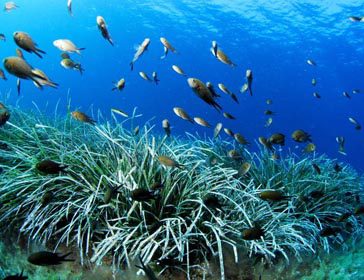 Up until now, only one species of marine phanerogam has been protected in the Mediterranean: Posidonia oceanica. With the new legislation, other phanerogams such as Zostera marina, Zostera nolti, Cymodocea nososa, Ruppia maritima and Ruppia cirrosa have managed to attain the same “rights” as their older sister.

What they are: despite the fact that they have traditionally been confused with algae and that their meadows are also known as prairies or seagrass fields, marine phanerogams are higher plants with flowers and fruits. We could even refer to them as the plant version of dolphins, because, like them, their ancestors evolved on dry land and subsequently decided to return to the sea.

Vulnerability: their importance as a generator of oxygen and organic matter is unquestionable, as is the importance of the habitats they create, which give shelter to hundreds of different species.

Of the three protected ecosystems, this is the one that is found in the shallowest sea beds, as being green plants they need a lot of sunlight to carry out photosynthesis. For this reason they are rarely found beneath 40 metres. Some of them, such as the Ruppia genus, prefer very shallow waters in peaceful areas of the coast and briny lagoons.

It is also not uncommon to see some meadows where two or more species are growing together, or where the larger ones act as a “breakwater” so that the less-resistant species can grow in the calmer waters.

Distribution: the Posidonia oceanica is endemic to the Mediterranean, while other phanerogams have a wider area of distribution in different parts of the Cantabrian Sea and the Atlantic Ocean.

Other habitats that need protection 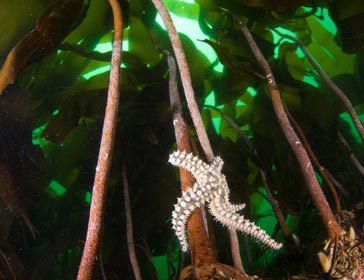 Oceana has also recommended to the Spanish government and the European Union that they include other highly vulnerable and important marine ecosystems on the lists of protected species, such as kelp forests (made up of giant brown algae), communities of Cystoseira (another brown alga that looks like a small fir), and other biogenic reefs (made up of living organisms) such as molluscs and polychaete worms.