Researchers from Oceana, the Spanish Institute of Oceanography and the University of Bari describe for the first time the biodiversity of this habitat, in decline from bottom trawling

The forest was discovered at a depth of 400 meters between Mallorca and Ibiza, an area Oceana has campaigned to protect

Scientists from Oceana, the Spanish Institute of Oceanography, and the University of Bari (Italy) have described and listed the biodiversity associated to a bamboo coral (Isidella elongata) forest for the first time. The colony was found in the Mallorca Channel at a depth of over 400 metres and contains an impressive density of colonies of this species of gorgonian, which is critically endangered with extinction in the Mediterranean.

“Bamboo coral populations have declined by more than 80% in the Mediterranean and are severely threatened”, explained Ricardo Aguilar, Research and Expeditions director for Oceana in Europe and co-author of the article. “The forest that we have found in the Balearic Islands is, by its extension and density, one of the largest groups of bamboo coral in the Mediterranean and dozens of species depend on it. It reaches densities of more than 2,500 colonies per hectare, while nearby areas impacted by bottom trawling only reach 30-60”.

The study has been published in a scientific article in The European Zoological Journal. The forest is located in an extremely interesting geological environment between the Ausias March and Oliva Bank seamounts and a field of pockmarks (gas seepage zones). This is an area in the Mallorca Channel that Oceana has set out to protect, located to the east of Ibiza and Formentera and home to several seamounts. 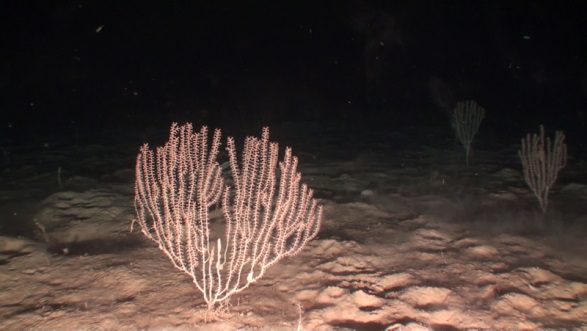 Bamboo coral develops in muddy bottoms and form vulnerable marine ecosystems that provide shelter to dozens of species, including several with high commercial value like Norway lobster and prawns. Numerous species use these environments as a refuge or to lay eggs, making them essential habitats for many organisms. This is the first time that a description of these forests has been given and the article details the extensive diversity found in these communities, including rare species like pedunculated brachiopods, carnivorous sponges and swimming sea cucumbers.

Oceana would like to thank the Adessium Foundation, the Robertson Foundation, the Biodiversity Foundation, and the Spanish Ministry of Agriculture, Food and Environment for their support to several expeditions in the area from 2006 to 2014.