A poll carried out by YouGov for Oceana has revealed that 65% of the public are either “not confident” (46%) or “don’t know” (19%) when asked if they think the UK government will be better at stopping overfishing in the UK post-Brexit, compared to the existing guidance from the EU. Overfishing, or fishing too much, is one of the most critical issues facing our oceans. The fate of UK fisheries was a key feature of the Brexit debate with leading Brexit campaigners Boris Johnson and Nigel Farage frequently citing it as an example of EU mismanagement, even though the UK has always played an active role in setting catch limits.

Interestingly, although 46% of respondents are not confident Brexit will be a positive influence on stopping overfishing, this figure rises to 60% in Scotland. The Scottish fishing industry contributes up to two thirds of the total fish caught in the UK and the country voted heavily to remain in the EU in last year’s referendum.

The poll also revealed a shocking lack of public knowledge about overfishing in Europe. A recent report commissioned by Oceana revealed that 64% of European fish stocks are currently overfished. However when asked, 83% of Brits either underestimated (31%) or said they didn’t know (52%) this figure. Overfishing, or fishing too much, is reducing year after year the amount of fish available in the water and threatening marine ecosystems and fishers’ livelihoods. If overfishing was stopped and fish resources were managed sustainably, European fisheries could increase catches by almost 60% more fish in less than 10 years or 5 million tonnes.

Oceana has created a campaign that aims to mobilize European citizens  in the fight against overfishing. On a new website stopoverfishing.eu allows visitors to ‘create a virtual fish’ either by picking one of the featured species or by using the hashtag #StopOverfishing on social media. Users of the site will be encouraged to take actions to stop overfishing throughout the year. The message to stop overfishing will be heard by politicians and decision makers! 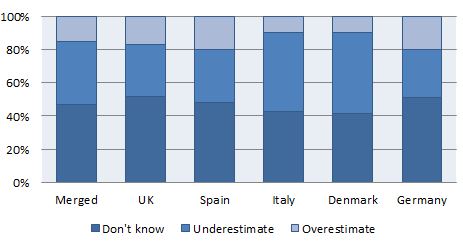 All figures, unless otherwise stated, are from YouGov Plc. Total sample size was 7,203 adults from Italy, UK, Germany, Spain and Denmark, of which, of which 2085 were from the UK. Fieldwork was undertaken between 3rd – 6th February 2017. The survey was carried out online. The figures have been weighted and are representative on a country-by-country basis and are representative of all adults (aged 18+) in the Denmark, Germany, Italy, Spain and the UK.