An underwater robot will help analyse impact on the seabed and reveal the best strategy for removing fuel and other pollutants
The Russian vessel “Oleg Naydenov” recently sunk in one of the most important fisheries areas in the Canary Islands. The location of the wreck, south of Gran Canaria, is home to important upwellings of nutrients originating from the Saharan coast and reaching the Canary Islands in the form of filaments.
These uprisings of nutrients or upwellings stimulate biological abundance and have formed an area of high productivity in which eggs and larvae of pelagic and seabed-related species are often found as well as high concentrations of plankton. Circular currents or eddies and jets have encouraged a great diversity of species to reside among the islands resulting in a highly abundant area, in contrast with the typical oligotrophic or nutrient deficient regions that are often found in the archipelago.
The main fish species affected by the sinking are vitally important not only to the local marine ecosystem but also to fishieries. They include sardines, menhaden, mackerel, horse mackerel, anchovies and tuna. In addition, the area also hosts the larvae of many other species including seabream, hake, mullet, scorpion fish, red porgy, boops, etc.
Moreover, dozens of migratory species use the area affected by pollution from the sunken Russian fishing vessel, including turtles, sharks, seabirds and cetaceans, which are often amongst the first affected wildlife during such events.

“We hope that the use of an underwater robot (ROV) allows a more complete study of the species impacted. It is essential to know the type of sea bottom the vessel has landed – whether it is stable or moving – in order to discern the best way of removing the fuel,” says Ricardo Aguilar, Director of Research at Oceana in Europe.
It must also be noted that the seabed accommodates rare gardens of black coral, coral reefs, sponge aggregations and communities of echinoderms, etc., as well as deep-sea sharks and large schools of grenadiers, amongst others.  In the deep waters of Gran Canaria abundant forests of black corals to depths of over 4,000 meters, white coral, stone sponges, “lollipops” sponges, and communities of sea lilies and sea cucumbers.

Photographs available for media use 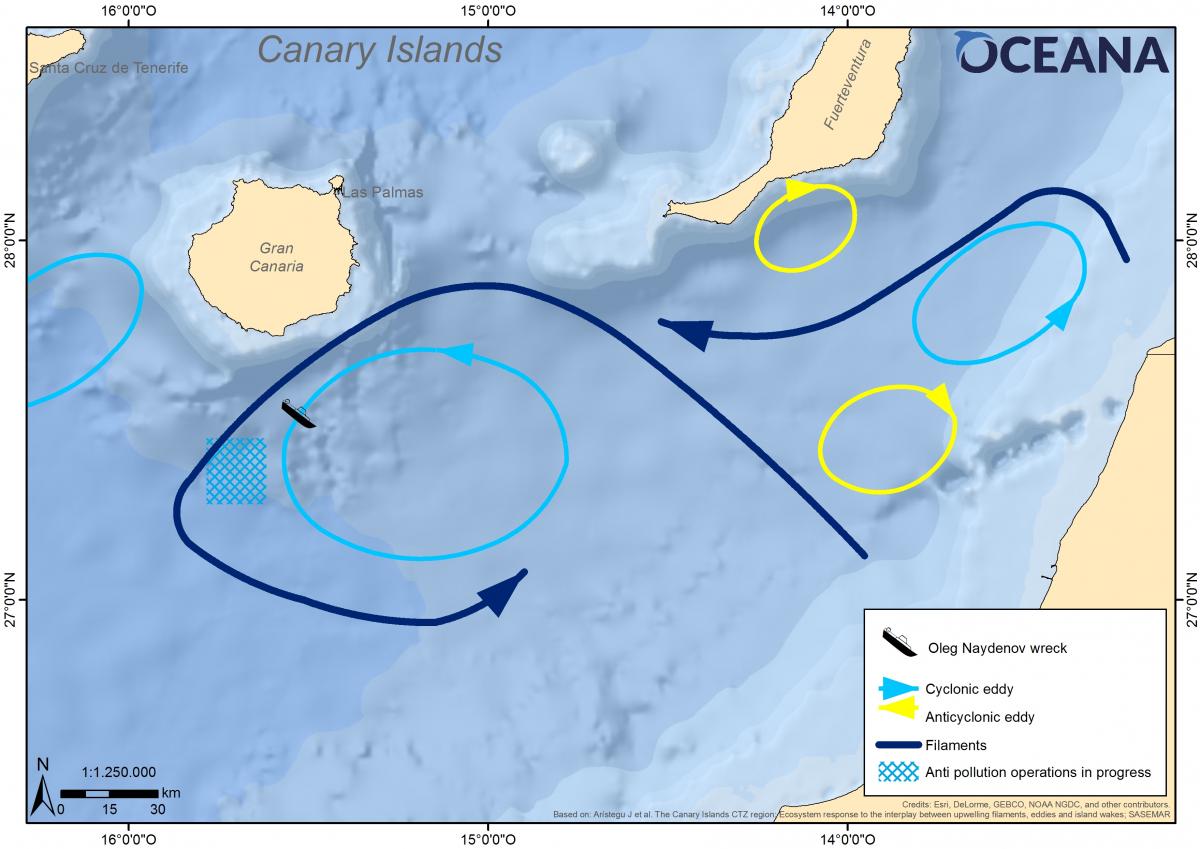