Oceana launched today a report uncovering 41 potential cases of illegal, unreported and unregulated (IUU) fishing in the Mediterranean Sea using data from Global Fishing Watch. The findings were submitted and discussed at two governmental meetings of the General Fisheries Commission for the Mediterranean (GFCM)1, during which countries failed to provide clarification on whether any vessel has been fined or if any punishable action will be taken.

“While Mediterranean governments and their leaders are committing globally to fight pirate fishing under the UN Sustainable Development Goals, the very same governments are turning a blind eye to potential cases in their own Mediterranean Sea. Information gathered by Oceana indicates that fishing vessels that can easily be identified are blatantly violating the law in fisheries-restricted areas. They’re doing nothing to uphold the law,” said Lasse Gustavsson, executive director of Oceana Europe.

Shockingly, Oceana identified more than 20 Italian bottom-trawling vessels presumed to have fished for more than 10,000 hours within a closed area designated to protect young hake fish in the Strait of Sicily – where this fish population is severely overfished and where the amount of hake caught is 3 times above sustainable catch levels.

The extent of illegal fishing in the area may actually be much worse. Official sources have confirmed fishing activity has been reported by vessels that are flying the flag of another country – for example, the Tunisian flag – and that are not using an automatic identification system (AIS), therefore going undetected in the report. 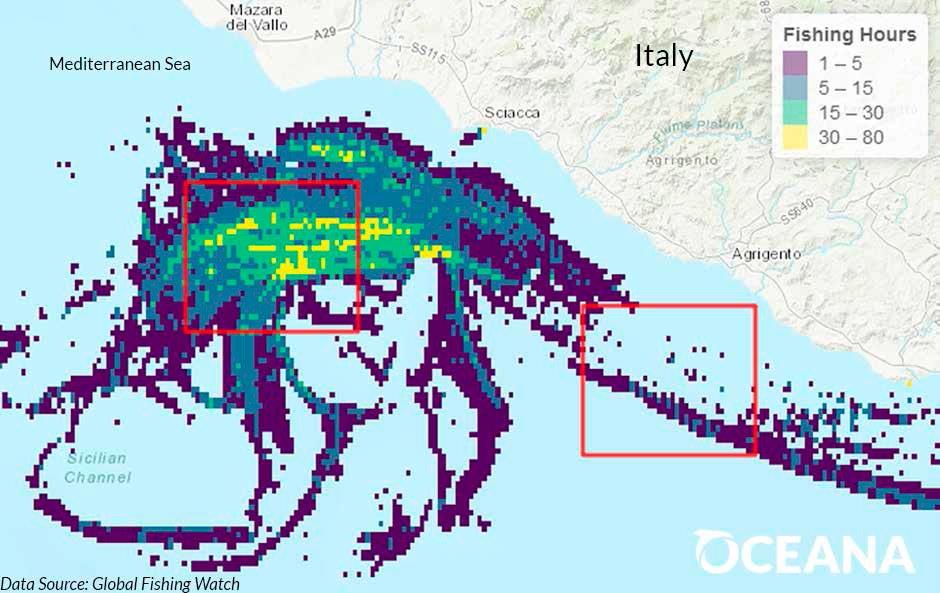 Additionally, Oceana has uncovered alleged illegal intrusions of foreign vessels into the waters of seven Mediterranean countries. Whether this is legal or not cannot be verified as, unlike other regional fisheries bodies around the world, the GFCM does not publish information on bilateral fishing arrangements. This lack of transparency makes it impossible to know if – for instance – three EU vessels that fished in Libyan waters (for more than 900 hours) and Tunisian waters (for more than 1500 hours), were fishing legally or not.