The study has been carried out on Seco de los Olivos (Chella Bank), a small seamount with a height of 600 metres off the coast of Andalusia

In the research journal Aquatic conservation: Marine and freshwater ecosystems, the Spanish Institute of Oceanography (IEO) and Oceana have published a map of the deep habitats of Seco de los Olivos, a seamount off the coast of Almería (Andalusia). This is the first time that the methodology, which uses statistical algorithms to generate continuous maps of seabed habitats by combining visual and geological data, has been used in the Mediterranean, and it could become an international model to improve the management of marine protected areas. Seco de los Olivos is an area of great biological diversity protected in the European Natura 2000 network.

“Only 3% of marine protected areas in the world have effective management systems that take into account the ecosystem as a whole and address all the possible impacts. Most do not have management plans or focus on a few species or habitats, nor do they regulate all potential impacts. This lack of management makes them ‘paper parks’”, explained Ricardo Aguilar, Director of Research for Oceana in Europe. 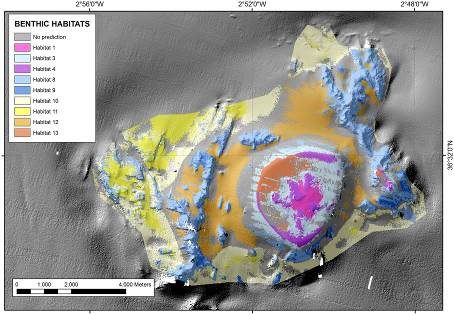 Seco de los Olivos was protected in 2014, within the LIFE+ INDEMARES project.The management plan is currently being developed. It will define the uses and the activities that can be carried out in the area and will also ensure an adequate level of protection of vulnerable ecosystems.

In the 3D model that has been developed, each colour represents a different biological community, and all of them harbour structuring species and great biodiversity. The distribution of all these vulnerable ecosystems occupies a major part of the seamount, which demonstrates that it is a biodiversity hotspot in the Mediterranean.

“The results obtained in Seco de los Olivos will be used to define the management plan for this protected area. The approach adopted for this work can be used as a model to follow in other marine protected areas and in particular in the Natura 2000 network,” said Ana de la Torriente, a researcher hired by the IEO and the scientist who has led the work.

The defining of the deep habitats has been made possible by a number of scientific expeditions that have sampled the seabeds of Seco de los Olivos, or Chella Bank, over a period of almost ten years. With the use of underwater robots, side-scan sonar systems, dredgers and the selective collection of samples, 13 main habitats have been identified.

The data obtained has made it possible to create a predictive model that allows the distribution of the different communities to be located on a map, which facilitates the management of the area and the application of specific conservation measures.

Oceana and the IEO have already worked together previously on different projects. This type of collaboration between public institutions (or research organisations) and NGOs has proven to be very effective in advancing the conservation of unique areas and vulnerable ecosystems.

Scientific article: Benthic habitat modelling and mapping as a conservation tool for marine protected areas: A seamount in the western Mediterranean