“Global Fishing Watch provides the first global view of commercial fishing activity,” said Jacqueline Savitz, vice president for the U.S. at Oceana. “This web-based technology will provide near real-time monitoring of global fishing activity to the public for free, to improve transparency and traceability in the global fishing fleet. It will allow journalists to track vessels of interest, scientists to study the interactions between fishing and ocean processes, governments to enforce policies aimed at rebuilding fisheries, and arm citizens, NGOs and activists with the information they need to hold governments and fishery managers accountable for managing fisheries responsibly.”

Also today, an article by leading scientists from the University of California Santa Barbara and Dalhousie University titled “Ending hide and seek at sea” was published in Science magazine. The piece, which was developed in partnership with Oceana, SkyTruth and Google, demonstrates the potential of tools such as Global Fishing Watch to “create near-comprehensive views of human use of the oceans that will empower a new era of spatially ambitious marine governance and science.”

“Using data from Global Fishing Watch, we can finally begin evaluating whether these massive marine protected areas are being enforced properly and really helping ocean wildlife – or whether they are simply ineffectual lines drawn on a map,” said Dr. Douglas McCauley, lead author of the Science article and assistant professor at the University of California Santa Barbara.

PIPA was established as an MPA in 2006 by the Republic of Kiribati, an island nation located in the Central Pacific, and is one of the largest marine reserves in the world (about the size of California). While only 12 percent of the area was off limits to commercial fishing from 2008 to 2014, President Tong placed 100 percent of the area off limits as of January 1, 2015. Global Fishing Watch enabled Oceana to monitor fishing activity in PIPA, revealing a stark reduction in the number of vessels detected fishing following the start of the new policy.

“When sound policy, effective monitoring and reliable enforcement work together, we can truly protect important ocean ecosystems,” said Savitz. “With a fishing ban in place in PIPA, commercial fishing vessels seem to have gone elsewhere, giving tuna and other important fish stocks a chance to recover and seed other fishing grounds. If we apply this powerful combination of policy, monitoring and enforcement in other existing and new MPAs, we can protect important marine ecosystems from the ravages of overfishing and illegal fishing.” 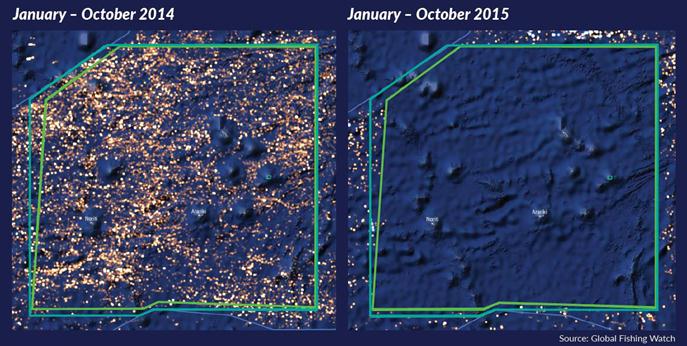 Global Fishing Watch, set to be publically available in 2016, analyzes data from the Automatic Identification System (AIS), which broadcasts a ship`s identity, location, speed, direction and more. AIS, a tracking system used by over 200,000 vessels around the world, was primarily designed as a safety mechanism to avoid collisions at sea, but information about vessel behavior, such as likely fishing activity, can be derived from Global Fishing Watch. This results in an unprecedented view of global commercial fishing activity for all stakeholders, including citizens, governments, fishery managers, scientists and members of the fishing industry itself.

Located in the middle of the Pacific Ocean between Hawaii and New Zealand, PIPA is home to one of the most prized fish known to man – tuna. It is also home to at least eight species of sharks, more than 500 species of reef fish, 200 species of corals, and many marine mammals like bottlenose and common dolphins. The reserve also includes a large number of seamounts, or submerged extinct volcanoes, which attract an incredible abundance of marine life, including large pelagic fish.

Please use the following link to share this release: http://bit.ly/1pb2r3v