A giant protozoon that imitates a carnivorous sponge has been discovered

The scientific journal “Zootaxa” published the discovery today: a joint publication by CSIC, the Centre d’Océanologie de Marseille, and Oceana

The new species was discovered on a seamount 30 miles off the Spanish coast.

Oceana and the Centro de Estudios Avanzados de Blanes (CEAB-CSIC) have discovered a new species: a unicellular organism of exceptional size (4-5 cm high), belonging to the phylum foraminifera, which imitates carnivorous sponges in its appearance and way of capturing food. The species was discovered 30 miles off the southeast coast of Spain, on the Seco de Palos seamount. The discovery of the new species, called Spiculosiphon oceana, in honour of the organisation that collected the samples, was published today in the scientific journal Zootaxa, in collaboration with an author from the Centre d’Océanologie de Marseille.

Foraminifera are single-cell organisms, a few millimetres long, similar to amoebas and able to create a shell for protection. What is striking about the specimens found is that they are 4 cm long, which makes them the largest known specimens of their kind in the Mediterranean. This species has another striking particularity: its appearance, which originally caused researchers to mistake it for a multicellular animal from the sponge family instead of a protozoon.

As described by Dr Manuel Maldonado, of the Spanish High Council for Scientific Research, who led the research and solved the enigma, “the configuration of the peduncle and head of this organism were very similar to those of the carnivorous sponges found in the Mediterranean. What is most extraordinary is that its shell was exclusively composed of spicules (skeletal pieces of dead sponge) which the protozoon had collected from the seabed, gluing them together with a “protein glue” similar to that used by sponges (spongin)”.

“The Seco de Palos seamount is proving to be a location of high interest in the Mediterranean. It was already known for its importance for such species as cetaceans, turtles, tunas, and sharks, but the discoveries in its seabeds are also surprising”, says Ricardo Aguilar, Head of Research in Oceana. “This strange species proves how little we know about our waters and the real danger of losing biodiversity even before it is known”. 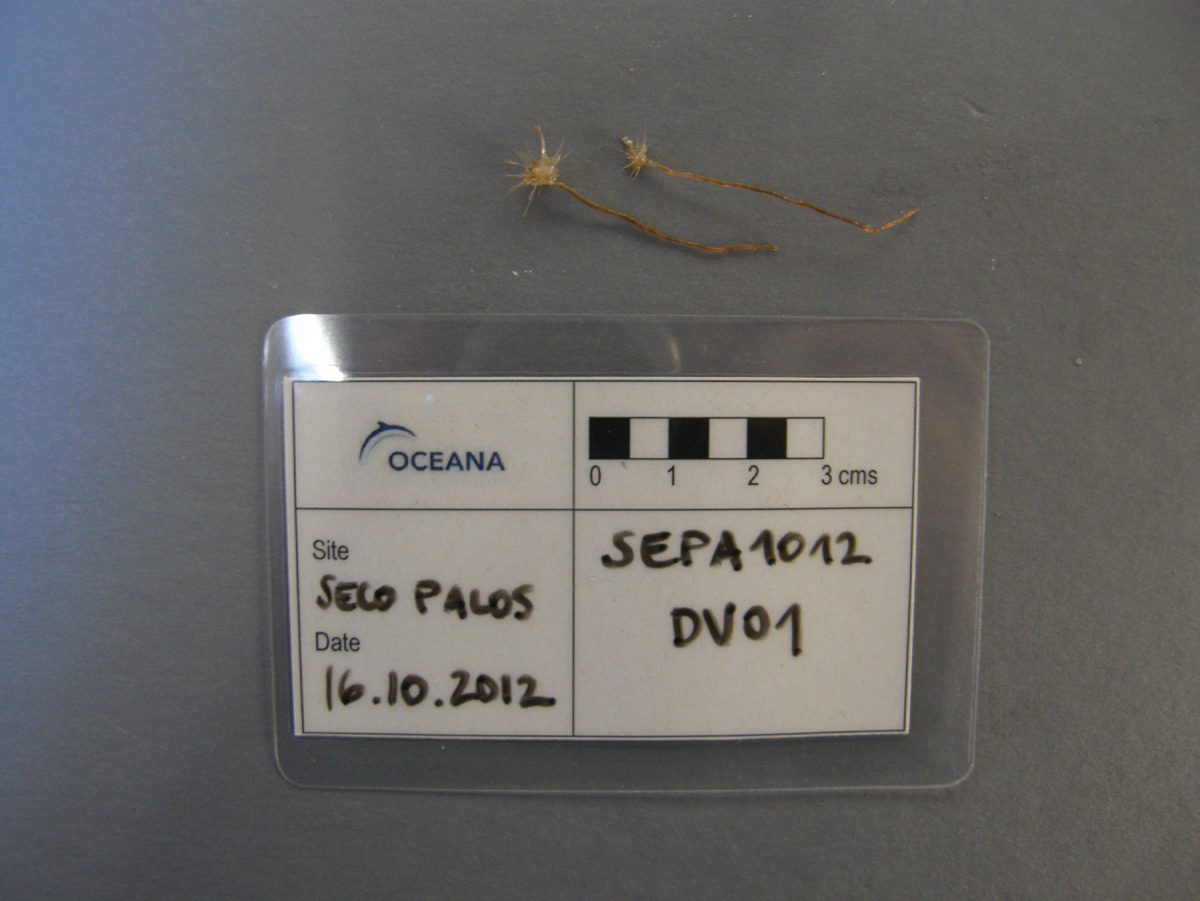 The foraminifer found belongs to a little-known family of these small organisms, schizaminids, of which only 11 species are known. S. oceana is the second species of the Spiculosiphon genus in the world and the only one in the Mediterranean. The only species in this genus until now had been Spiculosiphon radiata, discovered in Norway 40 years ago at a depth of 100 m. However, it is half the size of the specimen found on Seco de Palos.

At the same time as the research on the new foraminifer was taking place in the Spanish Mediterranean, Professor Jean Vacelet, a sponge specialist at the marine station of Endoume, of the Marseilles Centre for Oceanology, stated that he had found a similar organism in undersea caves in the French Mediterranean coast, where carnivorous sponges also live. However, this other foraminifer measured just 1 cm, smaller than the specimen found on the Spanish seamount.

That this new foraminifer shares morphological and feeding similarities with carnivorous sponges is probably due to the fact that both types of organisms live in similar habitats, which have forced them to develop similar feeding strategies. Oceana does not discard the possibility that carnivorous sponges may be found in Seco de Palo, as they have already been detected in other Spanish seamounts, such as Seco de los Olivos (off the coast of Almería) and the Emile Baudot and Ausias March seamounts in the Majorca Channel.

The three institutions –CEAB-CSIC, Centre d’Oceanologie de Marseille, and Oceana– have collaborated to cast further light on these interesting organisms.