Data shows over 44,000 hours of fishing with bottom-towed gear in Scotland’s Marine Protected Area network in 2020

All bar two of Scotland’s 24 offshore benthic Marine Protected Areas (MPAs) were damaged by bottom-towed fishing gears in 2020, making their ‘protected’ status mere lines on a paper map. Oceana recorded over 44,000 fishing hours using bottom-towed gear in inshore and offshore MPAs in the Scottish Exclusive Economic Zone (EEZ) in 2020. The analysis further shows that about 300 large bottom-trawlers and dredgers plough Scotland’s protected seabed on a near daily basis.

“We are calling on Scottish Ministers to take urgent action to ban bottom-towed fishing gear in all of Scotland’s Marine Protected Areas and reinstate the 3 nautical mile inshore trawl and dredge ban,” said Melissa Moore, head of UK policy at Oceana. “As well as being destructive, continued licensing of this activity is illegal under marine wildlife laws. Scotland needs to step up and protect its rich and diverse marine life. These damaging fishing methods also have a devasting impact on blue carbon habitats and ruin the fishing grounds of low-impact fishermen such as creelers.”

Of the Scottish offshore MPAs, only the deep-sea Hatton-Rockall Basin and Hatton Bank MPAs, far off to the West of Scotland, were not bottom-trawled. Offshore MPAs impacted include the Southern Trench, where a staggering 13,000 hours of fishing with bottom-towed gear took place in 2020. During an expedition to the Southern Trench in 2017, Oceana documented 16 species and seven habitat types that are considered priorities for conservation under Scottish or international frameworks. Key findings included kelp forests, reefs and other aggregations formed by ross worm, submerged caves, and sea pen and burrowing megafauna communities.

Bottom trawling and dredging are the most destructive methods to catch fish, causing a high impact on marine habitats, and effectively clear-cutting everything living on the seafloor.

This is not just an ecological disaster – trawling adds to the climate emergency and urgently needs addressing ahead of COP 26. According to a recent study, fishing boats that trawl the ocean floor release as much carbon dioxide into the water column as the entire aviation industry releases into the atmosphere, and UK waters are especially impacted.

Using bottom-towed fishing gear often results in irreversible damage to sensitive habitats such as maërl beds, coralligenous reefs, deep-sea coral reefs, gorgonian gardens and sponge grounds. Among the fish that are discarded by the bottom trawlers are often juveniles of valuable species, but also species of low or non-commercial interest, which are nevertheless important for the ecosystem’s equilibrium.

Bottom trawling has also seriously damaged fragile ecosystems like cold-water corals, which may be hundreds of years old but can be destroyed in the passing of a single bottom trawl. Once coral and sponge communities are destroyed, commercial fish and other species dependent on them for spawning, shelter, nurseries, protection and food, may also disappear. 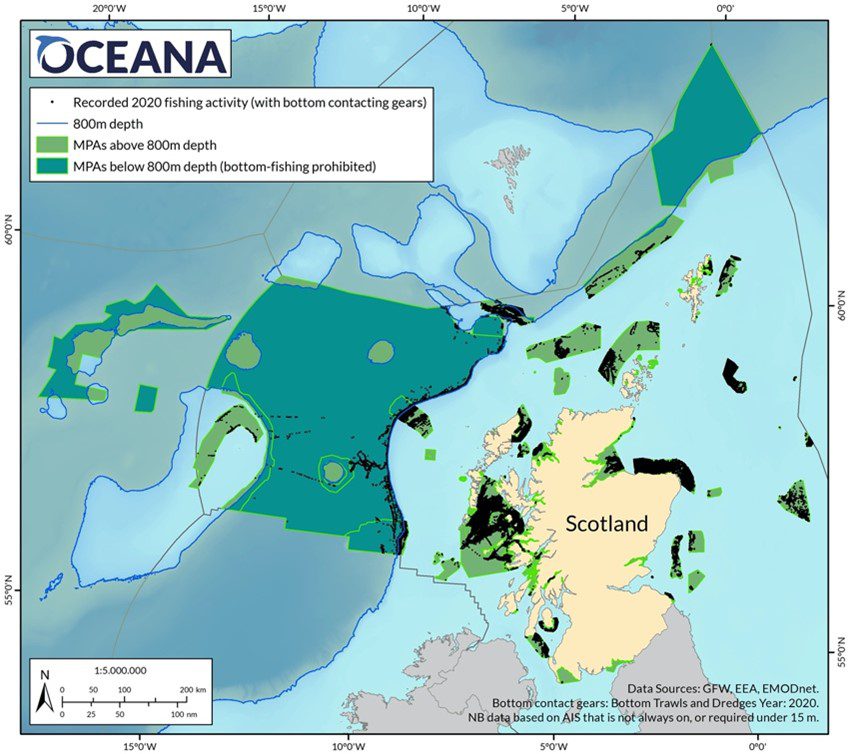 2. Oceana’s data is based on Automatic Identification System (AIS) (but some boats turn theirs off, and vessels under 15m are not required to carry it. Oceana’s findings are therefore likely to be an under-estimate). Fishing hours are based on data from Global Fishing Watch (GFW)1 and cross-referenced with the European Fleet Register, the European Environment Agency (EEA) and the European Marine Observation and Data Network (EMODnet).

Pictures of habitats and species from Scotland