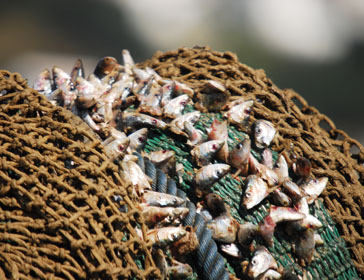 The most recent world report (FAO, 2005) estimates that, during the period from 1992 to 2001, 7.3 million tons of marine organisms were discarded each year around the world, representing 8% of the total catch.

Unfortunately, the discarded specimens are not likely to survive and are often caught before they have had time to reproduce. This practice also negatively affects the ecosystem in other ways: it benefits opportunistic predators (for example, some birds) and causes problems for communities of species that live on the seabed when the concentration of discards in decomposition is high.

This immense and unnecessary waste of live resources does not only threaten the future of many marine ecosystems, it also endangers the future of fisheries.

The incidence of discards varies depending on the target species, the fishing gear used, the area or the time of year, etc. Some fisheries have completely unacceptable incidence of discards: French deep-sea trawling fisheries in western waters have been known to discard 90% of its catches. In other words, only 1 in each 10 kilos caught is accepted, while the remaining 9 are thrown back into the sea.

Each year,  bottom trawls  in the North Sea targeting sole, apart from destroying marine habitats, produce an average of 330,000 tons of discards per 148,261 tons of landings.

The problem of discards is even more shocking if individual specimens are taken into account instead of tons: the 1996 European fleet register for vessels targeting North Sea prawns indicates that these discarded 928 million plaice , 16 million soles, 42 million cods and 55 million whiting, along with 75,000 million small prawns.

EC release: A policy to reduce bycatch and eradicate discards in European fisheries.