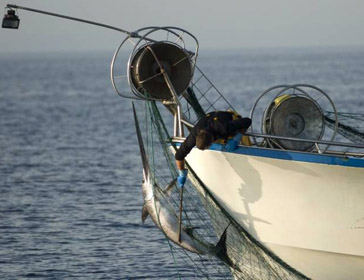 Driftnets are a type of fishing gear used to catch various pelagic species. During the 80s and the beginning of the 90s, this type of gear became popular due to its effectiveness and easy use. Because this gear is passive, it does not require any type of specialisation. However, driftnets bycatch thousands and thousands of cetaceans and other endangered species.

These nets can be up to 35 meters high and 20 km. long. In Italy, there are two types of driftnets: the spadara, used to catch swordfish, and the ferrettara, used to catch bullet tuna and bonito. In France, driftnets are called thonailles and their lengths range between 2.5 and 10.5 kms.

Fifteen years ago, the United Nations General Assembly established an international moratorium prohibiting the use of these nets and the European Union banned them seven years ago. According to the information Oceana has, in Spain drift nets have been substituted by other gear, but hundreds of French, Italian and Moroccan vessels continue using these nets known as “curtains of death” while they receive subsidies from European institutions to shift to other gear.