The Case of Morocco 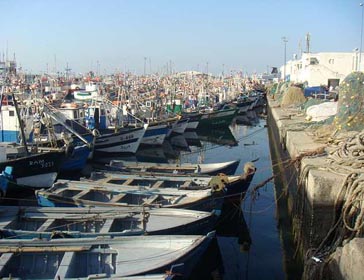 During the decade of the 90s, there was a significant increase in the number of vessels in the Moroccan fleet dedicated to fishing with drift nets. Among these, roughly 300 longliners temporarily or permanently used this fishing gear. This transformation was influenced by an increase in the demand for swordfish from the EU and the progressive withdrawal of this gear in Europe. In fact, there is an almost direct relationship between the decline in the use of this gear in Europe and the increase of the drift netting fleet in Morocco. During the 14th meeting of ICCAT in 2004, Morocco presented a plan to eliminate drift nets in a period of four years with support from the EU in the shape of 1.5M Euro. However, Oceana proved that this plan was not successfully developed, but Morocco was granted an extension until 2011.

This Mediterranean “transfer” of nets, along with the operative benefits of these compared to surface longlining gear, makes it difficult for Morocco to withdraw the nets and convert the fleet.

There is a paradox concerning drift nets in Morocco because, although Moroccan swordfish is mostly caught with drift nets, the distribution channels are European, and Spain is the main importer.

If we make an optimistic estimate that 38% of the swordfish catch in 2004 was caught using drift nets and taking into account that the production for that year was 3,253 tons, this would mean that the EU introduced in its market 1,150 tons of swordfish caught with gear that is banned in Community waters.