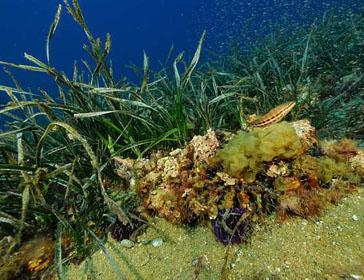 Not so long ago, many scientists assumed the ocean floor was a vast plain, lifeless and without currents. In the 1960s, scientists using early submersibles discovered that the ocean bottom is made up of familiar landscape features including great plains, deep canyons, mountain ridges and large seafloor hills, known as seamounts.

Like land-based environments, life in the ocean is linked in ways that scientists are still coming to understand. Scientists are continuously learning about what happens to the rest of the ocean when one marine species is depleted or even disappears. We do know, however, that while many fish and marine mammals travel thousands of miles around the world in their lives, others are only located in very limited areas and cannot survive the loss of their one special habitat.

Recent science has shown us that seamounts are actually often mounds resulting from thousands of years of coral growth. When such slow-growing animals are damaged or killed, the years, decades or centuries needed for the corals to recover can open the door for flat-bottom species to take over and push out species that prefer structured habitats.

Numerous studies have found that heavily trawled areas suffer biodiversity crashes, particularly in complex habitats. Scientists do not yet fully understand how the trawling-induced impacts on one species will affect other species. The longer we allow bottom trawling to occur in these habitats, the more likely we will lose species that are important for the marine ecosystem, food, medicines, and technological advances.