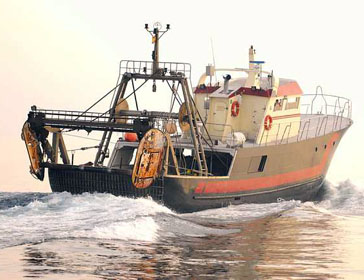 Bottom trawls have a footrope (the bottom lip of the net) that can span over 150 feet in width and can be lined with heavy rollers or rockhoppers that look like old tires and measure more than 30 inches in diameter. The larger trawls can drag over a half-acre swath with each pass. The damage done by even a single pass can be very extensive. Trawls with heavy, large-diameter rollers and rockhoppers have been shown to displace 19 percent of boulders in their path, some weighing 25 tons each.

The size of trawl gear and frequency of its use in an area can increase the severity of the damage. Before the mid-1980s, rocky, complex habitats were relatively undamaged because fishermen kept bottom trawls out of areas where structures such as corals boulders or pinnacles might snag the trawl net.

Frequent bottom trawling with large roller and rockhopper gear can change the species that live in the area. Habitat-forming species such as corals, sponges and fish that dig burrows or build mounds no longer thrive in areas where trawling has reduced the structural complexity of the seafloor.

In an experiment off Alaska, 67 percent of vase sponges and 55 percent of sea whips (a type of deep-sea coral) that were damaged by one pass of a trawl still had not recovered after a year of no further trawling.