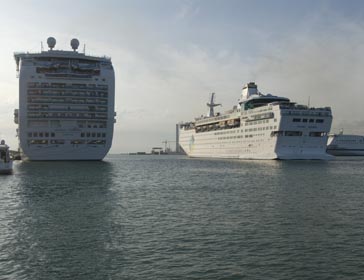 Within three miles, cruise ships can dump sewage from toilets that has been treated by sanitation devices, which have been shown to be inadequate. In addition, sewage from sinks and showers can be dumped without treatment.

Our coastal environment and marine life are at risk from the threats of bacteria, pathogens and heavy metals generated in these waste streams.

In June 2003, Oceana’s Stop Cruise Pollution campaign set out to convince Royal Caribbean Cruise Lines, the world’s second largest cruise company, to improve its waste treatment practices. Eleven months later in May 2004, Royal Caribbean agreed to install advanced wastewater treatment technology on all of its ships (then 29, plus any new ones).

With the first cruise company committed to upgrading sewage and wastewater treatment fleet-wide, Oceana declared victory and concluded the campaign.