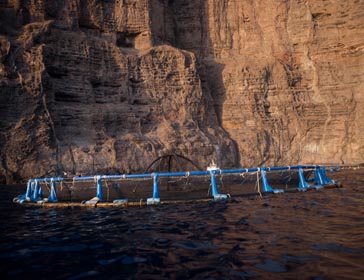 Open ocean aquaculture, without strict environmental regulation, poses a serious threat to marine life, fisheries, and the health of the oceans in general.

The high densities of fish in net pens used by fish farming facilities lead to disease outbreaks and a higher prevalence of disease overall. Captive fish often escape into the environment, where they can spread disease and compete with, or even prey on, wild fish populations. As a result of the disease outbreaks, many of the farmed fish are treated with antibiotics, reducing effectiveness of the same drugs for human diseases.

In addition, aquaculture is increasingly the cause of the overfishing of prey species. Salmon, tuna and other high-value captive fish are among the fastest growing seafood products in the world. Being carnivorous, farmed salmon require huge quantities of fish oil and fishmeal, making them heavily dependent on wild fisheries.

In Europe, Oceana works to reduce the harm caused by bluefin tuna fattening pens, where wild tuna are captured and fed heavily before they are sold. Wild populations of Atlantic bluefin tuna are already at all-time lows and additional captures to supply tuna fattening operations could accelerate their decline.