The spiny dogfish, also known as the spurdog, is found within all of the world’s oceans. Spiny dogfish are caught for a variety of purposes which include: fish and chips, shark fin soup, fertilizers, liver oil, pet food and as a popular dissection specimen in academic science labs. 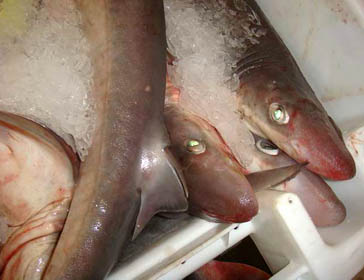 A highly valued species in Europe, the spiny dogfish is targeted in many trawl and line fisheries. Due to the popularity of the species and its inability to recover from high fishing pressures, the IUCN Red List status is “Critically Endangered” in the Northeast Atlantic, “Endangered” in the Mediterranean and “Vulnerable” in the Black Sea.

Oceana has supported the Atlantic States Marine Fisheries Commission and National Marine Fisheries Service efforts to require sharks be landed with their fins attached, which includes the spiny dogfish.