The sandbar shark feeds primarily on small fish in the bottom of the water column and is considered harmless to humans. The species is found in a variety of marine habitats, ranging from very shallow intertidal waters to depths of 280 meters. 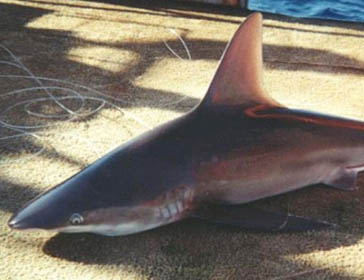 Larger-than-normal fins on the sandbar shark make it the most valuable large coastal shark species for fishermen. Commercial and recreational fisheries target the sandbar shark for its meat, use in shark fin soup and as a game fish. Currently the sandbar shark is listed as “Near Threatened” globally by the IUCN, but “Endangered” in the Mediterranean.

The dusky and sandbar sharks are hard to distinguish, especially when their fins are removed. As a result, managers are unable to determine the number of each species being caught and what the necessary protection measures should be. Oceana is working to require all sharks in the United States to be landed whole with their fins naturally attached.