The common thresher shark is easily identified by the unusually long upper lobe of its caudal tail. Such a lengthy fin allows the shark to herd and stun small schooling fish such as mackerels, bluefishes, needlefishes and lantern fishes. 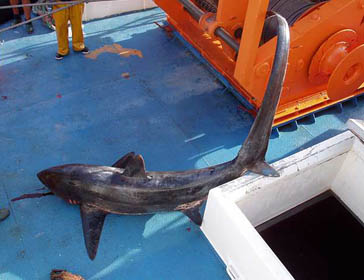 The common thresher shark is highly vulnerable to overfishing worldwide. An important economic species that is valued for its meat and fins, the shark is listed as “Vulnerable” on the IUCN Red List. Studies show a decline of over 99 percent in abundance and biomass in the Mediterranean in just over 100 years.

Oceana is working to get the Shark Conservation Act 2009 passed to require sharks, such as the common thresher, to be landed with their fins naturally attached.