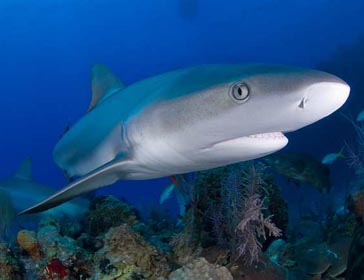 There are hundreds of species of sharks, ranging in size from the spine pygmy shark (7 inches) to the whale shark (40 feet), inhabiting all ocean waters and consuming a variety of prey species. Contrary to popular belief, sharks don’t eat anything and everything in the sea; many sharks have specific prey. For example, whale sharks, the largest sharks, consume plankton.

While each shark is unique, they share some common features. All sharks have a skeleton made of cartilage, not bones. This gives them great strength and agility without weight. Their body is covered in tiny scales with a tooth-like structure called denticles, which overlap one another along their body, facing tail ward. A shark that is rubbed head-to-tail feels smooth, but if it is rubbed tail-to-head it feels like sandpaper. These denticles provide protection and make the shark more hydrodynamic, reducing friction in the water.

Many sharks have a cryptic coloration, dark on top and white on the bottom, to make them less visible to predators and prey. Unlike other fish, sharks lack a swim bladder, a gas-filled chamber that allows fish to float. Instead, sharks have large livers filled with low-density oils that regulate buoyancy and give sharks vertical mobility so they can swim up and down in the water column with ease. Deep-sea sharks have the largest livers and thus, the most oils. As a result, they are targeted for these oils, especially the compound squalene, which is used in many cosmetic products.

Sharks exhibit complex behaviors as well as the ability to learn, demonstrating that they have a brain as big as some mammals.

Sharks have an extremely developed and sophisticated sensory system. Sharks can smell thousands of times better than humans and can detect chemicals and substances dissolved in the water millions of times over.

Contrary to popular belief, sharks also have extremely good vision and often depend on this highly developed sense. Their vision is well adapted to the marine environment and long distances. Their eyes are similar to other vertebrates, but they can’t close their eyes.

Even though sharks don’t have ears, they have tiny openings on their heads that lead to inner hearing organs similar to mammals. Sharks are very sensitive to sound, especially low frequencies from wounded animals, which they can detect from up to hundreds of meters away.

Their sense of touch is slightly different; it is a detection of changes in pressure applied to the body, as well as detecting changes in pressure of the water surrounding them. Like all fish, sharks have a lateral line that runs along each side of their body. The sensory cells in this system help the shark detect changes in water pressure and direction resulting from animal movements and vibrations. As a result, sharks can detect prey even in total darkness.

Sharks have a sense of taste. Their taste buds are in their mouth rather than on a tongue; sharks lack one. Sharks’ sense of taste is particularly sensitive to the presence of fat in the tissue of their prey — they require a high energy and fatty diet.

In addition to the standard five senses, sharks have adapted a sixth sense called electroreception. It is used to detect the minute electric fields that all living creatures generate.