Sea Turtles: What Oceana Does 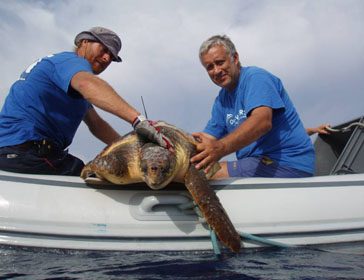 This Oceana programme was possible thanks to a collaboration agreement with the Fundación Biodiversidad and the help of the SECAC (Society for the Study of Cetaceans in the Canarian Archipelago) and served to draw up more effective protection plans.

By  satellite tags that were attached to ten turtles, our scientists were able to follow their movements on a daily basis as well as discovering their preferences  regarding   feeding depths and hours of activity throughout the day.

Working on board the Oceana Ranger, a group of sub-adult turtles that congregate in the western Mediterranean during the summer were located and tagged. Researchers from Oceana and the SECAC carried out a similar experiment in the Canary Islands on board the Oso Ondo, a boat specially chartered by these organizations to carry out their work.

Loggerhead sea turtle (Caretta caretta) start reproducing when their shells measure more than 80 centimeters, which occurs when they are around 15 years old. The tagged animals had shells of between 33 and 70 centimeters in length, so none of them is yet in reproductive age and they are still at the phase of migrations and pelagic life.

The measures adopted in the next few years to protect sea turtles could be vital for the survival of this species. In the last six years, the number of reproductive female loggerhead turtles (Caretta caretta) that have returned to the laying beaches of Florida (United States) has dropped to less than half. And it is these American populations that represent almost 40% of the world sea turtle population.

The loggerhead turtle (Caretta caretta) is the most common species in European waters, but it is also the one that is most frequently caught by accident. Every year around 40,000 turtles are caught on the hooks of the Mediterranean fleet. For this reason, Oceana combined this tagging work with collaboration on a project on the Spanish Institute of Oceanography with the fishermen of Carboneras (Almeria) to improve the selectivity of this fishery. The tags attached to twenty sub-adult turtles will continue to provide information for approximately one year.

Both in the Balearic Islands and the Canary Islands, the Oceana scientists took tissue samples and attached an identification chip to each turtle. After the samples were taken, a satellite transmitter was affixed to the shell of each turtle which would enable their migratory habits, behavior and other relevant data to be recorded with the aim of proposing management plans for their protection. Every time a turtle comes up to the surface to breathe, the satellite tag emits a signal that is transmitted to Oceana’s headquarters, where all the data is stored ready for study.

Many of these turtles originate from the laying beaches of the United States and the Caribbean, although some may have been born in the Easter Mediterranean, especially Greece, Cyprus and Turkey.

It is known that a large number of sea turtles, after leaving the nest in which they were born, set off on a long transatlantic migration that takes them to the waters of the western Mediterranean.  Then  they start their return journey using the Gulf Stream until returning once again to their laying beaches, having completed a round trip of more than 10,000 miles. But much of the biology of these animals is still unknown, such as where they spend a large part of the year, especially in their sub-adult stage and during the winter season.

In previous experiments, tracking turtles by satellite tags has allowed some light to be shed on their habits. We now know that the turtles spend part of their life in Atlantic waters and part in the Mediterranean; adult females can lay their eggs on different beaches throughout the same year.