In 1982, scientists estimated that there were 115,000 adult female leatherbacks worldwide. Recent estimates have placed the number between 20,000 and 30,000. The Pacific leatherback is in such severe decline that scientists believe they will become extinct in the Pacific Ocean within the next 30 years unless significant actions are taken to protect them very quickly. 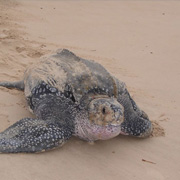 Incidental catch in fishing gear, poaching of their eggs and ingestion of plastics have all contributed to the listing of the leatherbacks as Endangered.