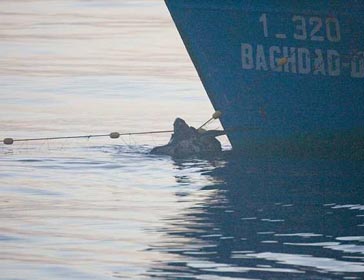 Along with fishing gear and climate change, there are numerous human activity  threats to sea turtles. These threats include coastal development, pollution, direct harvest, invasive species and vessel strikes.

With the encroachment of hotels, parking lots and housing along nesting beaches, female turtles are forced to use suboptimal nesting habitats. After emerging from their nests at night, newborn hatchlings find their way from nest to sea using the light of the moon.

Artificial lighting, such as street lamps and hotel room lights, confuses these hatchlings, sending them landward in the wrong direction. This is a lower  chance for survival due to dehydration, exhaustion, predators and automobiles.

Solid waste, chemicals and pollutants from human activities enter the ocean, causing injury, illness and even death to sea turtles. The pollution sources range from wastewater discharge released by cruise liners to fishing nets that are lost by fishermen to fertilizer runoff that comes down rivers from farms. This means that even people living in the middle of the European Union can have an impact on the health of the oceans and sea turtles.

Thousands of  chemicals contaminate the marine environment, many of which accumulate in the tissues of sea turtles, affecting their locomotion, brain functioning and reproductive success. Sea turtles also consume plastics and marine debris which are harmful to their digestive systems. Scientists believe that there may be a link between exposure to agricultural pollutants and the spread and prevalence of fibropapillomatosis, a disease in sea turtles that causes tumors to grow on the eyes, intestinal tracts, lungs, mouth, heart and other organs.

Each year, more than six million tons of trash enters the oceans, with plastics comprising up to 90 percent. Marine trash poses an entanglement and ingestion hazard to turtles, threatening their ability to forage, grow and, ultimately, survive. A study conducted on young loggerhead turtles found that 15 percent of the turtles had ingested large amounts of plastics that blocked their stomach from functioning.

Invasive species are non-native species of plants, animals or insects that have been introduced into an area where they are not found naturally. They can wreak havoc on native species by competing them for space and food or by acting as predators.

Examples of invasive species include a stowaway barnacle from a ship ballast, a hidden plant seed in the sole of a hiking boot worn on a remote island or a pet iguana released in the wild. For sea turtles, non-native species, such as fire ants, rats, red foxes and domestic dogs, can be very dangerous on the beach, where they  dig up nests and eat sea turtle eggs.

Sea turtles cannot breathe under water and their regular ascent to the surface puts sea turtles directly in the path of boats. Commercial and recreational vessels are major turtle harzards, particularly in shipping lanes and during peak tourism months when millions of recreational boaters congregate in coastal areas.

Boat collisions are one of the main identified  source of trauma for turtles found stranded and dead on Mediterranean beaches. Injuries from boat propellers include amputated flippers, fractured shells, brain injuries and broken bones. Although not all of these injuries cause  immediate death, they may provoke  elevated levels of stress or injuries, which ultimately affect a sea turtle’s ability to forage, migrate, escape from predators and reproduce.