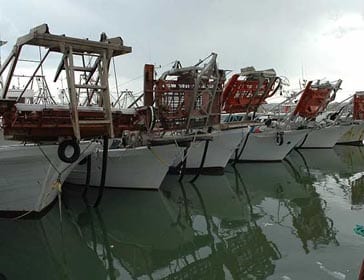 A trawl is a large net that is pulled through the water column or along the seabed, catching anything that is not small enough to pass through the net’s mesh openings. This fishing gear is typically used to catch fish or shrimp. Catching unwanted species is a problem for trawlers because it is a very indiscriminant form of fishing. Trawling can occur with one boat pulling a net or by two boats, each pulling an end of a much larger trawl net.

Sea turtles  are prone to drowning when they are caught in trawl nets and are crushed or are unable to escape to the surface to breathe. Turtle excluder devices (TEDs) were designed to protect sea turtles and are required in shrimp trawls in US but not in EU. A TED is a grid of bars in the neck of the net with an opening, reminiscent of an escape hatch. The bars are spaced far enough apart to allow shrimp and fish to pass through to the tail of the net while allowing large species, such as sea turtles, to escape from the net through the opening.

The mandated use of these devices has greatly reduced the death of sea turtles in shrimp trawl fisheries but there are several other trawl fisheries which are not currently required to use TEDs.

Sea scallops, clams and other animals which live on the ocean floor are caught using a method known as dredging. Dredging is a destructive method of fishing that involves dragging a dredge, or heavy metal frame and bag made of heavy metal chain links, often weighing several thousand pounds, along the seafloor. Dredges rake up bottom habitat, including corals and sponges, while collecting scallops and other bottom-dwelling species. Dredges also entrap or crush other organisms that rest and forage on the seafloor, including sea turtles.

Longline fishing is a commercial fishing technique that uses thousands of baited hooks hanging from fishing line, often miles long. Swordfish, tuna mackerel, snapper and grouper are commonly targeted by this gear type. Longlines can be set to hang at varying depths depending on the targeted species.

Leatherbacks, which primarily inhabit the open ocean, are especially threatened by longlines hung near the surface. Loggerheads are often caught by longlines on the ocean bottom since they forage on bottom dwelling species.

Longlines are often set in the water for extended periods of time. By the time deeper set longlines are removed from the water, the hooked turtles may have drowned. Even if a sea turtle survives being hooked on a longline, it will have injuries that can be very serious. There are ways to disentangle turtles from fishing line and to remove hooks, but the process can be time-consuming, complicated and dangerous depending on the size of the turtle and weather conditions at sea.

Gillnets are long walls of netting hung in the water to trap and hold fish. Gillnets can be fished in a variety of ways: anchored, so they float in one space at the top of the water column, set on the ocean bottom or left drifting in the current. A fish swims into the invisible netting and as it swims in reverse to try to dislodge itself, its gills become caught in the twine.

Sea turtles, like fish, become entangled in the netting. Because sea turtles need to come to the surface to breath, they die if held under water for too long. If they are alive when the net is retrieved, they are often injured and stressed. Turtles can lose flippers from entanglement in gillnetting. If a turtle survives from a  gillnet, the turtle is then more vulnerable to predation and has reduced ability  to carry on normal activities.

Purse seines are typically fished using two boats — a small skiff and a launch vessel. The skiff encircles a school of fish, dragging one end of the net behind it. After a complete circle is made, the launch vessel tightens a rope to close the bottom of the net. Purse seines are not generally left underwater for extended periods of time, so the resulting risk of turtle mortality from forced submergence is relatively low compared to other gear types. However, bycatch in seines presents an ongoing problem for turtles and other marine wildlife, such as dolphins and sharks.

Pound nets are stationary fishing devices that can extend more than 15 feet in length and are used to catch a variety of species including striped bass, bluefish, crab, croaker and flounder.

The pound net system is divided into three sections: a perpendicular leader that acts as a partition to block fish and other ocean critters from swimming past; a heart-shaped wall of nets that forces animals to swim in the direction of the pound; and a pound net that serves as the actual entrapment basin where fishermen can collect and sort their catch.

The tops of the nets poke out of the surface of the water, making sure that fish and other animals do not escape. As sea turtles swim parallel to shore, their path is blocked by the fence-like leader, where their fins or heads can be entangled, causing serious injury or death from drowning. Recent studies have shown that decreasing mesh size and increasing net stiffness can lower sea turtle bycatch rates in pound nets.