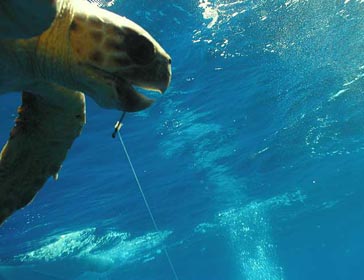 In order to reduce sea turtle injury and death, modifications can be made to certain types of fishing gear, including the following examples:

Circle hooks can significantly reduce the number of hooks that are lethally ingested by turtles. Unlike J-hooks, which tend to be swallowed by sea turtles as they ingest the baited line, circle hooks tend to snare turtles in the beak or mouth. A turtle that has had a hook removed from its beak or mouth is more likely to live than a turtle that has fully ingested a hook. The use of circle hooks could significantly decrease the post-hooking mortality rate of sea turtles.

Many of our country’s trawl fisheries unintentionally injure and kill endangered sea turtles by entangling them in their massive nets. In Oceana’s report, “Trouble for Turtles,” we found that an average of  770 sea turtles are captured each year in the mid-Atlantic trawl fisheries alone. Fortunately, there’s a turtle excluder device (TED) that allows a sea turtle to free itself from the trawl net only minimally harmed.

A TED is a grid of bars in the neck of a net with an opening, reminiscent of an escape hatch. The bars are spaced far enough apart to allow shrimp and fish to pass through to be captured in the tail of the net while allowing large species, such as sea turtles, to escape.

Studies have shown that trawl nets equipped with properly functioning TEDs could lead to a 97 percent reduction in sea turtle mortality. In 1992, the federal government required all U.S. shrimp trawlers in the Atlantic Ocean and Gulf of Mexico to use TEDs in all waters, during all seasons.

Thanks ,at some extent,  to Oceana’s work, in 2003, the regulations were altered to require a larger TED opening which allows larger turtles to escape.

While some trawl fisheries use TEDs, too many do not and are not required to. Oceana is working to get TEDs  obligatory  in every trawl fishery in the Atlantic Ocean and Gulf of Mexico that operates in times and areas with sea turtles.

Sea scallops), clams  and other animals which live on the ocean floor are caught using a method known as dredging. Dredging is a destructive method of fishing that involves dragging a dredge, or heavy metal frame and bag made of heavy metal chain links, often weighing several thousand pounds, along the seafloor. Dredges rake up bottom habitat including corals and sponges while collecting scallops and other bottom-dwelling species. Dredges also entrap or crush other organisms that rest and forage on the seafloor, including sea turtles.