Cetaceans: What Oceana Does 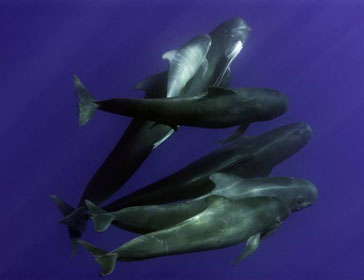 Oceana leads campaigns to  collect scientific data on cetacean sightings. This information is included in sea bottom studies to focus on the need to declare   marine protected areas.Oceana also conducted specific studies on the status of cetaceans in the Galician and Bay of Biscay and the need to boost efforts to protect them.

Selectivity in fishing gear and the use of non-aggressive gear with the environment is another Oceana strategy to protect cetaceans. The use of driftnets in the Mediterranean  is one of the severest ones because they trap thousands of cetaceans, turtles and other species indiscriminately. Trawling also has a direct impact on accidentally catching cetaceans and destroying their habitats.

Oceana is working to establish measures that minimize the impact with vessels and eliminate the sonar that affects cetaceans’ communication and orientation.

Recently, Oceana has conducted a research  in the Galician and the Bay of Biscay area. The study proposes declaring marine protected areas   with interest for cetaceans in that area as stated by the Habitat Directive and made possible by Spanish laws.