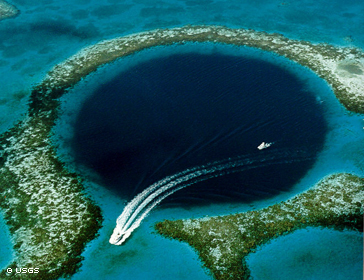 The Belize Barrier Reef is a 300 km long section of the 900 km long Mesoamerican Barrier Reef System, which stretches from the northeast tip of Mexico’s Yucatán Peninsula to Amatique Bay, Guatemala, making it the second largest coral reef system in the world after the Great Barrier Reef in Australia.

Belize is home to three of the Western Hemisphere’s four rare offshore atolls, which are circular reefs surrounding a central lagoon. One of the country’s most famous attractions, the Blue Hole, is part of Belize’s Lighthouse Atoll. A mecca for divers, the Blue Hole is a sapphire-blue submarine cave more than 90 meters wide and over 120 meters deep.

In 1842, in his study of the evolution of coral reefs, Charles Darwin declared that Belize was home to “the most remarkable reef in the West Indies.” More than 150 years later, that spectacular reef is increasingly threatened  by overfishing, habitat destruction, pollution and climate change.