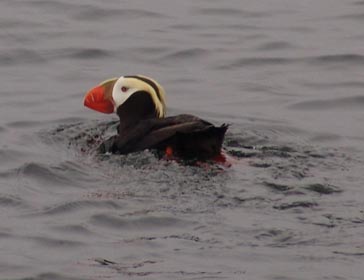 Some of the world’s most extraordinary animals call the Arctic home, including more than 25 species of marine mammals, dozens of species of birds and hundreds of different fishes. Many of these animals are endangered and all of them are facing unprecedented challenges as the Arctic environment undergoes rapid changes.

Marine mammals migrate to and from the Arctic for food, with some living permanently in the far north. Bowhead and beluga whales  swim underneath a ceiling of ice, searching for their next breathing hole. Polar bears  patrol the ice on a quest for food; seals and walrus swim gracefully through the water.

Birds flock to the Arctic from all seven continents in the summer, when 24 hours of daylight spawn a short-lived but explosive growth of food.

Fish are an important part of the Arctic marine food web. Forage species such as Arctic cod  and capelin  are especially important to other animals of the Arctic. Fish are also a staple of the diet of many Arctic peoples.