Aleutian Islands: What Oceana Does 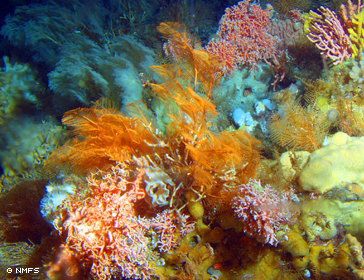 Oceana works to protect and restore the extraordinary marine ecosystems of the Aleutian Islands. This includes work on a variety of issues in a number of policy areas, including:

Oceana’s approach to coral protection is centered around gathering the science and other information about coral habitat, including the threats from bottom trawling and other fisheries in this region, and advocating for management measures that protect corals while maintaining vibrant fisheries.

This includes “freezing the footprint” of bottom trawling, which allows bottom trawling to occur only in areas that have been previously trawled and preventing trawlers from expanding into new areas, enforcing bycatch limits and improving research, mapping, monitoring and observer coverage measures.

An ecosystem plan for the Aleutian Islands

The Pew Oceans Commission and U.S. Commission on Ocean Policy reports both came to the conclusion that our oceans are in trouble and we must immediately shift to an ecosystem-based management approach to protect ocean ecosystems while maintaining sustainable fisheries.

Oceana is working with the North Pacific Fishery Management Council, local communities and others on implementing this kind of management for the Aleutians. This includes developing a Fishery Ecosystem Plan for the region, which takes into account all aspects of the ecosystem for policy decisions, as opposed to previous management plans that tend to focus only on one single species or aspect of the ecosystem.

The pollock fishery in the Bering Sea and Aleutian Islands has been unintentionally catching alarming numbers of Chinook salmon in recent years, peaking at more than 130,000 salmon caught in 2007.

Oceana is calling for fishery managers to “count, cap and control” this bycatch through thorough monitoring, an enforceable limit on the amount of salmon the pollock fishery is allowed to catch, and measures to ensure that limit is implemented and responsibly managed to ensure salmon have the chance to return to spawning streams, not pollock nets.

This same pollock fishery has also seen a dramatic decline in pollock stocks in recent years, and Oceana is calling for a reduction in the number of allowable catch of pollock to ensure that enough pollock remain in the ocean as food for endangered Steller sea lions, salmon, halibut and other animals, and to prevent the pollock fishery itself from collapsing along the lines of the New England cod fisheries of last century.

Ensuring safe passage in the Aleutians

3,000 ships pass through the Aleutians each year, many of them large tanker and cargo ships traveling between the U.S. west coast and Asia. Despite this high traffic, and the challenging conditions found in the Aleutians, there are currently few resources in the region to respond to any spill or shipping accident that may occur.

Recent disasters like the Selandang Ayu in 2004, during which more than 300,000 gallons of fuel were spilled, highlight the urgency of a spill response plan for the region that includes adequate funding, resources and trained personnel in the Aleutians to respond quickly and effectively to a shipping accident. We are advocating for those measures at the state and federal level.

Oceana has also teamed with local groups to place two electronic shipping monitoring stations on the Pribilof Islands in the Bering Sea, taking direct action to strengthen and expand measures to monitor vessel traffic in the region.