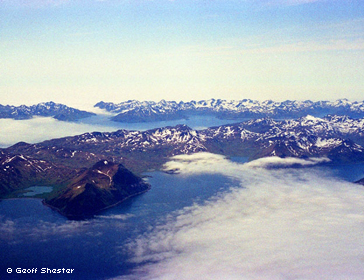 The Aleutian Islands are a long archipelago of volcanic islands stretching from mainland Alaska 1200 miles across the Bering Sea towards the continent of Asia.

Rugged, beautiful and tied to the sea, the Aleutians are part of an ocean environment like nowhere else on earth.

The Bering Sea is connected to the rest of the North Pacific through the deep and shallow passes that bisect the narrow shelf of the Aleutians. The cold, nutrient-rich currents that speed through the passes cause an explosion of life and productivity.

Home to birds from all seven continents, more than 450 species of fish, ancient deep-sea corals, and at least 26 species of marine mammals, the Aleutians are truly a wonder.

The Aleutians have long been inhabited by the indigenous Unangan, or Aleut people who have lived on the islands and subsisted on the marine resources of the region for more than 10,000 years.

Even the plant life of the Aleutians relies on the sea. In a place where there are millions of birds, but no trees, endemic Aleutian grasses, flowers, and shrubs rely on seabird guano to fertilize growth.

Unfortunately, commercial exploitation of the natural resources of the Aleutians has resulted in alarming population declines and habitat destruction. Currently, commercial fisheries are the largest industrialized activity in the Aleutians. Between 220 and 440 million pounds of fish are removed annually from the Aleutian Islands region, mostly by destructive bottom trawls.

Oceana works to protect and restore the extraordinary marine ecosystems of the Aleutian Islands.