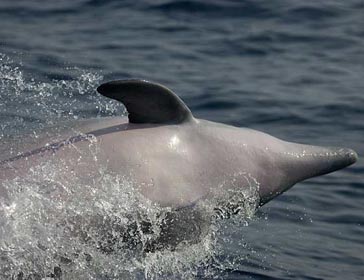 The island of Alborán is the peak of a mountain which existed prior to the birth of the Mediterranean Sea five million years ago. The island itself is a mere 550 meters long and 290 meters wide. Despite its size, the island has a long history of human use due to its strategic location midway between southern Spain and northern Morocco.

It is believed that the ancient Greeks maintained a light on the island since 900 B.C., enabling ships to pass the island without danger on their way to the Strait of Gibraltar. Due to the island’s steep coast, there are only two piers for ships to land located to the south of the island.

In the Mediterranean Sea, zones of high species diversity have been detected in the Sea of Alborán. These zones are characterized by Mediterranean and Atlantic species, as well as components of the North African fauna and some endemic species. For this reason, the island of Alborán was designated a protected nature reserve in 1967 due its ecological significance.

The island is home to one of the most threatened marine species in the Mediterranean, the limpet species Patella ferrunginea, as well as bottlenose dolphins  and several species of coral. The island is also one of the most significant breeding sites for seabirds in southeastern Spain and serves an important stopping place for migrating birds on their journey between Europe and Africa.

Sea bird species include: Audouin’s and black headed gulls, European storm petrels, gannets, razorbills, cormorants and puffins . In the sea, dolphins, whales and sea turtles, as well as a rich variety of fish and shellfish such as prawns, bream and hake can be found.

Southeast of the island, the endangered red coral (Corallium rubrum) has been documented. There are also extensive meadows of the seagrass  (Posidonia oceanica), protected by European Union legislation and provides habitat and important nutrients for marine life.