Fisheries in the Baltic 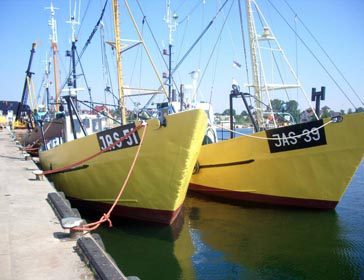 Overfishing and destructive fishing practices like bottom trawling represent a major threat to the Baltic ecosystems. In 2008, fishermen from all the surrounding countries caught more than 50 different fish species in the Baltic, for a total of 742 thousand tons of fish. Finland, Sweden and Poland are the largest Baltic fishing nations. Sprat and Herring are the main targeted species in the Baltic, representing 85% of the total catches. They are often caught by industrial fishing vessels and used for the production of fish meal. Cod, flounder, perch and salmon are other important Baltic commercial species. Fisheries in the Baltic outside the 12-nautical-miles zone are mainly managed by the European Commission, however Baltic countries manage fisheries inside the 12 nautical miles and can adopt management measures for their entire own fleet as long as they are more stringent than the current EU law. Fisheries management is poor in the Baltic and most of fish stocks, assessed by ICES, are overfished and even fall outside the safe biological limits – a status that is far away from sustainable fishing.

The use of unsustainable fishing gear poses large threats to the Baltic marine ecosystems as well as the discarding of unwanted bycatch. Bottom trawls are highly destructive because they effectively clear-cut every creature living on the seafloor.

Trawls and dredges use large, heavy nets kept open by metal doors, weighing several tons each, many of which are dragged across large areas of seafloor to catch fish that live on or near the ocean floor. As an example in the Baltic, bottom trawling is used for catching cod and flounder.

Apart from fish, thousands of seabirds and hundreds of mammals are killed in the Baltic every year, where they end up entangled in fishing gear. For grey seals drown in fishing gear is the most common cause of death. Driftnets have been banned in the Baltic, however gillnets and fixed fishing gear are causing great problems as well, these bycatch birds and mammals, and caused as a matter of fact a long-term population decline for common porpoise (Phocena phocena) in the Baltic Sea.