The Basque coast and its marine extension have significantly suffered from the impact of coastal occupation and the use of its resources throughout the years and as a result, most of its natural environment has been altered by human activity. However, the area located between the cliffs of Ulia and Jaizkibel coast are almost untouched, with barely any land development.

The cliffs of Jaizkibel and Ulia are two coastal-land areas in Guipuzcoa that were declared Sites of Community Importance (SIC) according to the criteria of the EU Habitats Directive 92/43/CEE. According to the Directive, these SICs in Jaizkibel and Ulia should be declared Special Areas of Conservation (SAC) before the end of 2010 in order to be subsequently included in the Natura 2000 Network. This process involves the development of effective management plans.

As far as national legislation is concerned, the objectives of the Spanish Law on the Protection of the Marine Environment include the creation of a network of protected areas and to “promote the conservation of ecological corridors and manage the elements that are essential or significantly important for migration, geographic distribution and genetic exchange between populations of marine species of fauna and flora“. 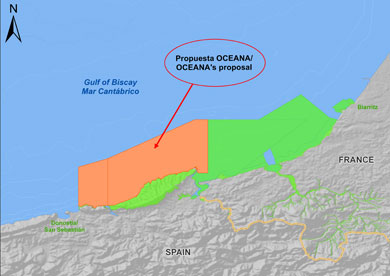 Last, concerning regional legislation, specifically the Plan for Coastal Protection and Planning of the Autonomous Region of the Basque Country, both SCIs are included in the “Area of Strict Protection” category and because both are also located close to the Bidasoa marshes and terraces, they are included in the “Open List of Areas of Natural Interest of the Basque Country”.

For this reason, Oceana requests that the submerged marine area off Jaizkibel and Ulia be included in the Natura 2000 Network to increase the area’s ecological and geological value. This would form a corridor of marine protected areas along with the Bay of Txingudi (proposed as a SCI and SPA for birds) and the French government’s proposals for the Basque coast.

Download the report “Portection of the marine are of Jaizkibel and Ulia, Basque Coutry” (Spanish)